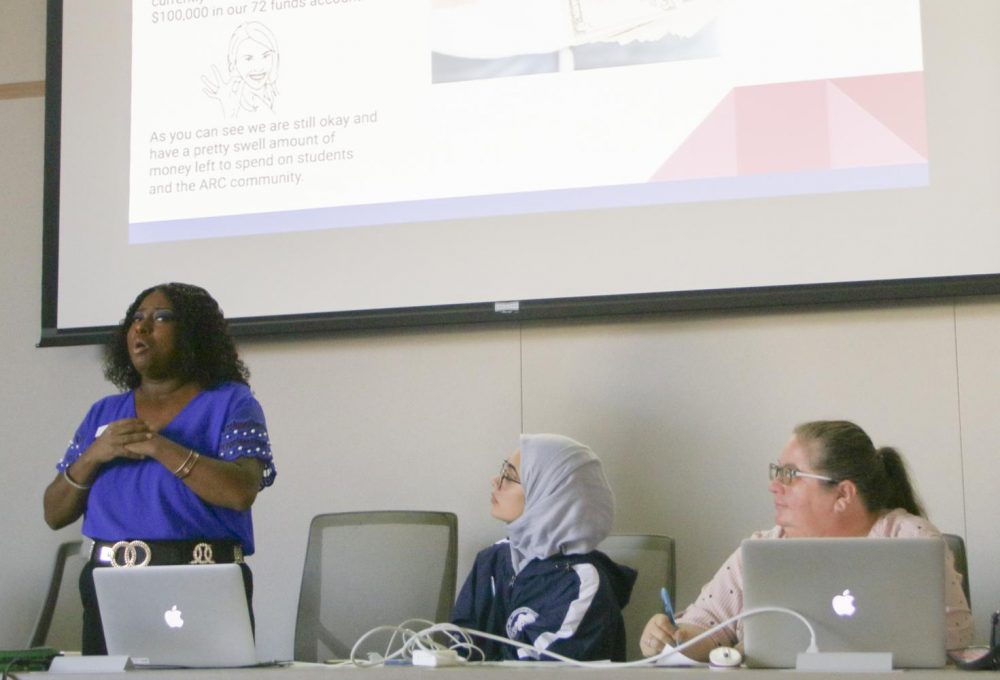 Director of Finance Sha Toyia Anderson (left) presented the Finance Report for the Associated Student Body's fall 2019 semester to the rest of the ASB Student Senate on Dec. 6, 2019. (Photo by Jack Harris)

Anderson’s report outlined spending goals and concerns for ASB. This semester, ASB has allocated $56,400 through various bills, and has actually only spent $25,656.69. Anderson explained that just because money is allocated does not mean it’s actually spent. ASB often allocates more money than needed in case of unforeseen expenses, she said.

“We want to make sure we’re spending on what’s necessary,” Anderson said. “Also to spend money for the ARC students and the greater community.”

ASB postponed to vote on Bill F19-XX until their next meeting in January. The bill would allocate $3,000 to send the ARC Sociology Club to the 2020 Pacific Sociological Association in Eugene, Oregon. The postponement came after the Senate cited concerns that a physical copy of the bill was not present and what the club learned at the meeting, would not necessarily help ARC.

The Senate passed the Queer & Trans People of Color (QTPOC) Conference Bill F19-XX, which allocates $3,950 to send ARC students to the QTPOC Conference at University of California, Riverside.

ASB also moved to pass the Lobby Day Bill F19-XX and the Spring SLADE Conference Bill F19-XX. These bills each allocate $1,000 for expenses, food, supplies and transportation relevant to each conference, respectively.

There are no upcoming ASB meetings this semester, and next semester’s meeting schedule has not been finalized.