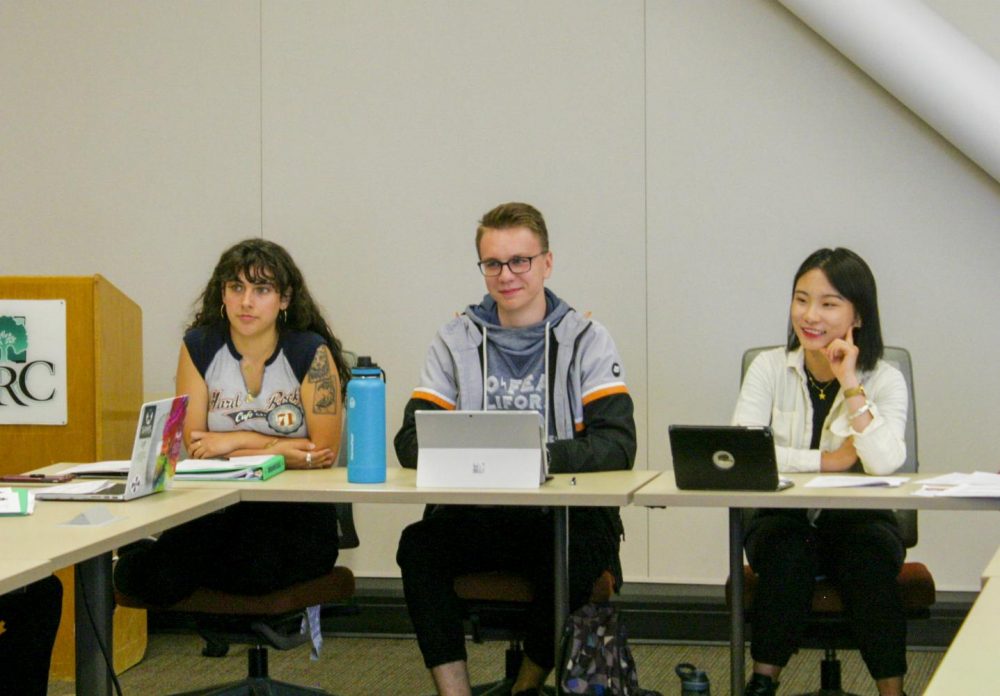 (From left to right) Senator Desireé Rodriguez, Jacob Couch and Fang Liu listen before voting on Bill F19-XX, which will reallocate $15,000 for the Senate registration, at American River College on Oct. 11, 2019.

The American River College Associated Student Body met Oct. 11 to swear in a new senator and discuss a new bill, the Circle of Change Bill F19-XX, that would allow up to $15,000 to be reallocated for Senate Registration. They also met to discuss and possibly take action on creating student inclusion training for staff and faculty.

In the student senate meeting Friday, Muzamil Ahmad was appointed and sworn into the Student Senate. In his comments, he expressed his excitement at joining the senate board.

“It’s a privilege to be a part of the progression at American River College,” he said.

When senator Alexxandria Paige  asked what Ahmad would focus on as senator, he said he plans on f continuing the diversity of the school.

The Circle of Change Bill F19-XX would allow up to $15,000 to be allocated for the Senate’s registration and accommodations for student senators and for the senate, the Club and Events executive board members, as well as advisors and other students.

Before the bill was voted for, Senate President Aesha Abduljabbar announced that the amount allocated in the bill had been lowered from up to $20,000 to up to $15,000.

Student Senate Advisor Brett Sawyer let the senate know of some “barriers” that other schools have had to deal with when working with the conference, saying that the location of the conference, Cal State Dominguez Hills, has no hotels near it.

He also commented that last year, two out of three campuses that he knew who applied could not get their paperwork in, due to the fires that were in the area last year.

“I don’t have any insight on what that conference may be, [or] what you could take away from it,” Sawyer said, explaining that he did not know what to expect.

Sawyer also let the senators know that this would not be a vote on who would go, but on whether the senate would be allowed to attend at all.

The senate passed the bill unanimously.

The senate also created a special committee to figure out the logistics of creating inclusion training for staff and students, after discussing the creation of Student Teacher Inclusion Training. Senate Vice President Juan Melesio will serve as the chair with Club and Events Board (CAEB) President Kevin Hill acting as a member.