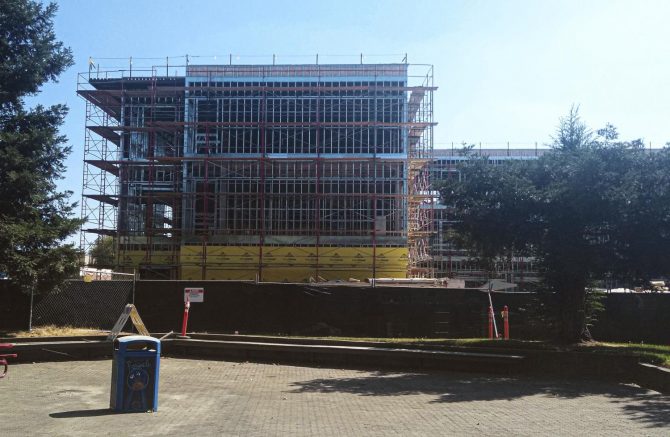 The Science, Technology, Engineering, and Mathematics (STEM) building continues to be a working progress as the semester resumes at American River College on Sept. 16, 2019. The STEM building is on track to be finished in 2020, according to Public Information Officer Scott Crow. (Photo By Bram Martinez)

As many people may have noticed there is construction of a new building at the heart of campus, where the liberal arts area used to be in order to modernize its equipment and utilities.

ARC’s Public Information Officer Scott Crow said the new building will give students a new, better experience in the classroom.

“This building will be more innovative with its classrooms, including walls that don’t move, swing space for offices, moveable chairs and the latest state of the art modern technology,” Crow said.

It was funded by California’s state budget via Bond Measure M, also by donations from alumni.  The building is being subcontracted by Flint Builders and is scheduled to be finished by 2020, according to Crow.

Diane Bryant is an alumnus who donated funding. She holds an associate degree from ARC, as well as a few alumni awards from California community colleges and University of California, Davis.

Bryant was a former group president of Intel’s Data Center Group and former Chief Operating Officer of Google’s Cloud Platform, according to a press release.  She holds four U.S. patents on chip design.

As the campus forms more alternate routes to bypass the construction, some students are not reacting well to the disruptions. Design major Adonis Mustafa said he doesn’t like the alternate routes.

“The building is going to look nice but it is taking entirely too long, I don’t want to walk around it,” Mustafa said.

Crow said there are ways for newer students to work around the construction, but that it may temporarily get worse.

“The heart of the campus is currently blocked off due to the construction, so students have to take alternate routes around campus, some of which are longer than others,” Crow said. “Make sure to make some extra time to get to your classes.”

Crow added that some routes may change due to the unveiling of the hydronic lines.

Crow also said that the STEM building will not be the only construction project for ARC and that there are different phases to the overall plan for updating the entire campus and ARC’s satellite campus, the Natomas Center.

“The next one is phase two and three of the Natomas Center,” Crow said. “The next new phases of further projects have yet to be announced.”

Nevertheless, there have been few setbacks.

“The construction of the building has been unfazed by the heat, with the only set-backs being the rare rains,” Crow said. “The construction is of course disruptive to nearby classrooms, but luckily FLINT is flexible and understanding with their and our schedule, thus is slated to finish in the summer of 2020, and is still currently on track.”