Sac State Hornet declares print dead; Is the Current next to go? 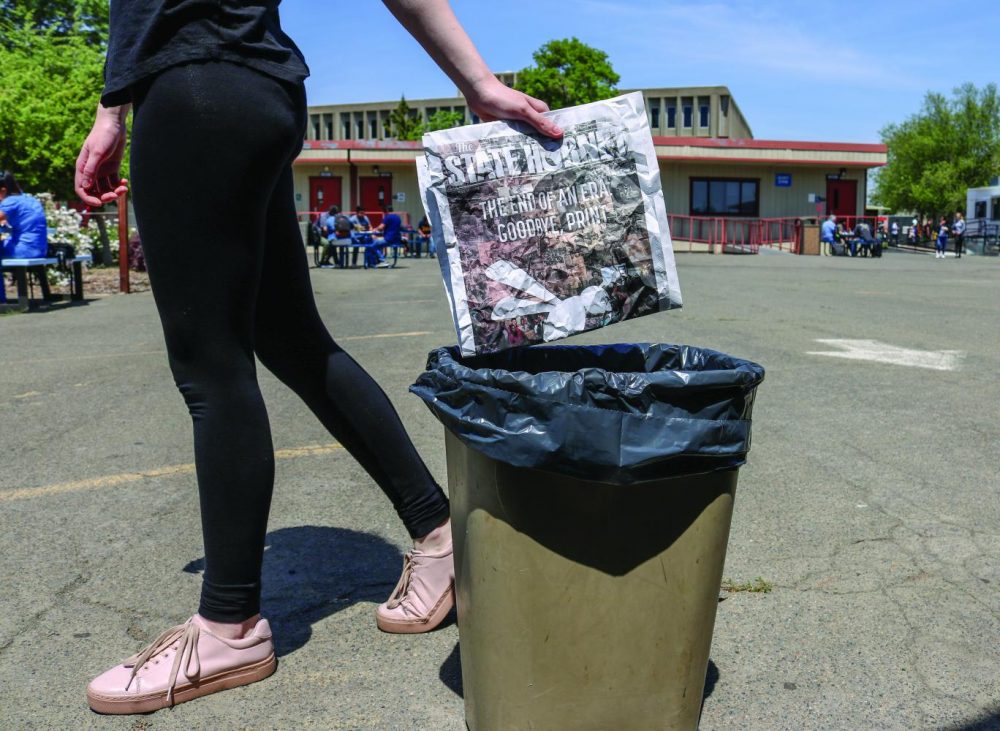 Sacramento State campus newspaper the State Hornet transitions to an entirely digital platform, raising the question as to if the American River College Current will reflect the same industry standards. (Photo illustration by Ashley Hayes-Stone)

The Hornet has been preparing this year to transition to a digital-only publication, after the decision to retire its print edition.

The Hornet’s Editor-In-Chief Claire Morgan said that the decision was approved over a year ago and has been put into motion in the time since.

“I think it’ll be really exciting,” Morgan said. “We completely redid the budget to be digital-focused, we’ve switched around the editorial roles and the way that the class works. All the systems are in place and we’ve had this past year to sort of tinker with everything.”

Morgan points out that online mediums are more easily accessible, cheaper to produce and easier to maintain.

“Many of our editors and staff members devote so much time and so many resources to our print,” Morgan said. “We had so many more people coming to our website than picking up our print product. We decided that it was better to allocate our time and our funds towards being a digital-only publication.”

Morgan added that the skills learned from developing online web pages would arguably be more impressive to possible employers.

“I’ve spent so many hours designing [our print edition],” Morgan said. “I know that I’ll never get paid for knowing how to design a print newspaper … so to be able to say I learned how to code in that time would have been much more productive.”

While Morgan views the decision to go completely digital as bittersweet, Stu VanAirsdale, faculty adviser for the Hornet, said he had no qualms about the move.

“[This decision] is two years in the making,” VanAirsdale said. “We didn’t just spring this on everybody … We did our market research on this. We turned ourselves over as a case study to the business school [at Sac State] … they crunched the numbers and it’s exactly how we thought it would be: people want to read the State Hornet online.”

VanAirsdale said that although there had been objections, the Hornet’s decision remains firm.

“Once you show people that you have an audience-focused mission then it’s hard to hold it against us,” VanAirsdale said. “You can still say you like print, and that’s fine. [But] you have to understand that what we do here is guided by a very specific mission, and print just does not fit in that mission anymore.”

Even so, VanAirsdale acknowledges that a lot of valiant and valuable effort is put into print journalism.

“I don’t diminish the work that print does, however,” he added. “I don’t take what [print journalists] do lightly. But [the Hornet] can do a lot better reaching audiences by adapting to a more digital-first mentality … We need to stay with what they do that also matches the audiences’ demand.”

While VanAirsdale says he has no emotional connection to print, American River College journalism professor Alan Miller said that print journalism is a medium that needs to be protected and valued in this digital age.

“There’s something different about print journalism, about holding something in my hand,” Miller said. “I realize change is inevitable … but there’s got to be a place for print. You’ll never completely get rid of it.”

Miller also said that many online news resources are able to publish fabricated or inaccurate news that readers can take as fact, whereas investigative teams put time and research into ensuring that print articles are entirely factual.

“People want to get a quick fix, but they don’t want to take the time to read a longer story,” Miller said. “Journalism keeps an eye on what’s going on … if you cut out newspapers and investigative staff, then you’re left with people going on blogs online.”

However, Miller said he is open to seeking out a possible middle ground between print and digital journalism.

“I would hope [a compromise can be reached],” Miller said. “I don’t know what that compromise is, but if we go totally digital we’re going to lose something.”

Rachel Leibrock, faculty adviser for ARC’s student-run newspaper the Current, says that the publication itself is likely to follow in the same direction as the Hornet.

“I think that within the next year or two we expect to drop the print edition and go fully digital to reflect industry standards,” Leibrock said. “As much as we may have a nostalgia [for print] we have to move forward and serve our students.”