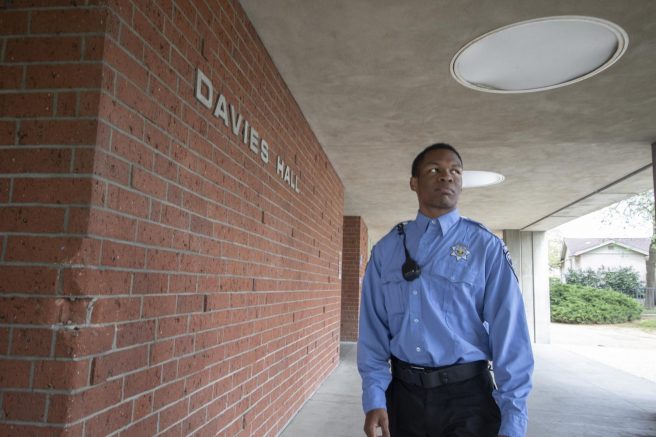 Campus patrol officer Joshua Harris walks the perimeter of Davies Hall to ensure the safety of the campus at American River College on April 3, 2019. (Photo illustration by Ashley Hayes-Stone)

At American River College, a network of police officers, campus patrol, staff and faculty are taking advantage of continuously modernizing technology to make the campus a safer environment for students and staff.

Over the past year, Los Rios community colleges have undergone technological updates, according to Scott Crow, ARC’s public information officer, to improve student welfare on campuses. From security camera upgrades to the new Rave Guardian app, the Los Rios Community College District is creating a network of systems that work together to ensure ultimate safety for its campus community.

Crow said the Rave Alert system has gone through processes of evaluation to improve its functionality and ability to reach people districtwide.

“It used to be that if there was something going on at ARC, it would only go out to ARC,” Crow said. “Our population has become so mobile and we have students taking classes at multiple colleges that it just didn’t make sense. We made the change a couple semesters ago to have those alerts go out to everybody now.”

Crow said it is important for students to keep their information current on their eServices account, so they can get the alerts when they are sent out.

Rave has also created the Rave Guardian app as another safety feature for students. According to the company’s website, the app was designed by Rave Mobile Safety, a software company based out of Massachusetts. Rave customized the app for Los Rios community colleges.

Crow said that in addition to the new app, which has been active since last semester, the Rave Alert system will remain in place. Rave Alerts will continue to be sent out as usual and the app is an additional tool for students to use.

The app has many features that allow users to discreetly contact security, access emergency procedures, receive alerts even without a cell signal, access a custom call directory and set virtual safety timers when walking alone.

“The safety timer is a piece that we want to let people know about because we hear from students that have night classes and are walking in the dark. Some students just want that extra security feature,” Crow said.

According to Crow, Rave Guardian allows students to create a list of “guardians” through the app. The list of guardians is similar to a favorites list, with trusted friends or family.

Users can set a safety timer and select a guardian to track their movements. It is encouraged that the guardian contact the user right away if they have not heard from the user after the timer has gone off.

Not only is the Rave Guardian app up and easily available for download, but various security cameras are being upgraded to create safer areas throughout LRCCD campuses.

Charles Uhlmeyer, a facilities planning and engineering specialist with LRCCD, said that the camera upgrades are occurring districtwide.

Uhlmeyer said the main purpose of the project is to update an aging camera system with newer, high-resolution cameras, which will provide a more robust Video Management System (VMS).

“This will provide more complete coverage,” Uhlmeyer said in an email interview. “This project is part of the district’s ongoing efforts to improve safety and security on all our campuses.”

Uhlmeyer said that the new security camera system will be placed according to the identified camera placement standards set by the district. These standards call for camera coverage in all parking structures, parking lots, central campus quads and main pedestrian thoroughfares.

ARC’s police captain Christopher Day said that the more camera coverage there is throughout campus, the safer it is for students. Day said the cameras are a tool for officers to pull up live footage of suspicious persons or activities and to go back and view footage to get more specific information.

“The more cameras we have on campus, the better off we are being able to provide some type of proactive or reactive security to that person,” Day said. “I’m looking forward to new stuff coming in. Technology is constantly upgrading. It’s just going to help us in the long run to follow up on crimes or events on campus.”

Day also said students should be aware that the campus shuttle is a resource to utilize when prioritizing safety. The campus shuttle runs Monday through Thursday from 5:30 p.m. to 10:30 p.m. and is available to all students.

“I mean it won’t drive you right outside your classroom door, … but it’ll get you from the edge of campus out to your car in the parking lot,” Day said.

Day said the campus shuttle circles through the lots on campus. Students or staff can wave down a campus patrol officer on duty or call dispatch, and campus patrol will contact the shuttle to pick them up at their location. Pickup areas include Lots B, D and G.

English major Isaac Kelly said he has used the shuttle to get around campus.

“I feel very safe on campus. A couple semesters ago I was taking night classes that got out at 9 p.m,” Kelly said. “I’ve used the shuttle more than a few times to get around campus. I really like it and thought it was a very good idea to make ARC a safer campus.”

Another safety initiative that has been implemented over the last year is the standardization of body-worn cameras (BWCs) for all sworn-in police officers on duty. According to Day, all Los Rios officers are required to wear their body cams daily. Officers have their own body cams with their own docking stations and any footage taken is then stored in the docking station.

Day said body cams are part of moving forward and taking advantage of the best technology.

“It’s technology, it’s law enforcement, it’s society, it’s protection of the public as well as the police officers,” Day said. “Technology is growing with society and its something our department decided to take on for everyone’s benefit.”

Crow said it’s important for students to know ARC is continuously working towards instilling entire safety networks, where everyone in the community is contributing to safety and emergency preparedness.

Day said as technology continues to improve, creating a safe environment will only be made more possible.

“I think with the more things that are available with cameras, technology and cell phones, the more ability we have to head things off,” Day said. “The more technology and skill set that’s out there, the more we can all work together as a team throughout the district and our campus to make sure everyone is safe.”