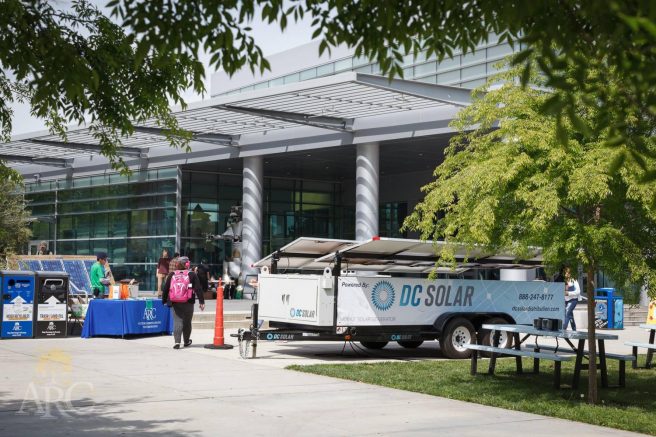 DC Solar set up a trailer for display at American River College's 2017 Earth Day Celebration in front of the Student Center. (Photo courtesy of Don Reid / Sustainability at ARC)

Last semester brought big changes to American River College with the installation of 15 new solar-powered trailers across its three campuses, and now faculty is looking to improve the accessibility to these devices.

The trailers on campus have three varieties: LED light poles, outlet stations, and electric vehicle chargers, and are worth a total value of over $2 million, according to the [email protected] website.

Solar-powered outlet stations, along with sets of picnic benches, have been placed in each the Portable Village, Computer Math Complex, and near the stadium. The tables can be used for charging phones, laptops, and other devices.

Tabitha Hopkins, an anthropology and biology major, told the Current last semester that she hopes to see more of the outlet stations around campus in the future.

“I like having chargers out here,” Hopkins said. “There was no form of outlets before [in the Portable Village] so it makes it easier to do work over here.”

Despite the convenience of free electric vehicle charging, some students and faculty have found that they have trouble parking and accessing the stations. Non-electric cars are free to park next to the chargers, because there is no designation for electric vehicles.

The spaces next to the stations will eventually be painted and labelled to reserve them for electric vehicles, though currently the process is held up by the process of painting regulations.

“There’s some questions as to whose responsibility it is to stripe everything,” Reid said.

Solar-powered electric car charging stations have been placed on the main campus on the north and south sides of the parking lots, and the Natomas Center and Public Safety Training Center campuses each received an electric vehicle charging station as well. 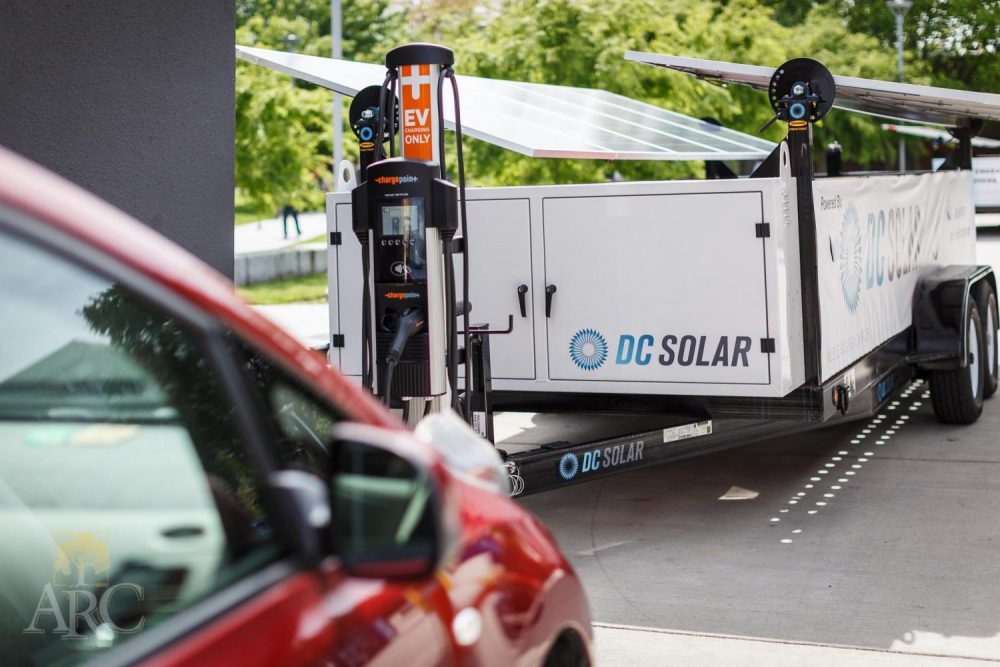 The stations are mobile and workers can move the units to different locations on campuses when necessary to prevent damage.

“We had a little vandalism with one of them at the Regional Public Safety Training Center,” Reid said. “But we moved it in and it seems to be a better place for it now.”

The mobile units were placed on campus with the idea that they would be moved eventually, according to Reid, in order to be more accessible.

“Initially we had it in our head that [the stations] were gonna go where they go, and that we would kind of build the infrastructure around where they landed and got moved to,” he said. “We’re kind of moving them around and micro-adjusting.”

Repainting the stripes on campus can be a long process, because it must go through the district and contractors, according to Reid. Once the permanent locations of the stations are determined, stripes will be painted to designate their spots so they will be more visible to students.

“It’s just time-consuming,” Reid said. “[The parking spots] are going to get striped as ‘e’ (electric) only, it just hasn’t been done.”

The trailers are manufactured by DC Solar Solutions, a company based in the San Francisco Bay Area that designs and produces solar and hybrid energy powered products. The company also provides regular maintenance for the units when needed.

DC Solar was a sponsor at CHESC to promote their services to universities.

“[The keynote speakers] were saying, ‘If you want one of these solar-powered trailers … go talk to [DC Solar] about getting one at your college,’” Reid said. “So I went out and said, ‘Are you talking to community colleges?’ And they said, ‘of course.’”

At first, Reid wasn’t sure if ARC, as a community college, would qualify to receive the trailers, but he scheduled an appointment with the company to visit and survey the campus anyway.

“[DC Solar] walked around campus … and said, ‘You’re ‘going to need about 20 of these,’” Reid said. “That’s when they emphasized — these are all free. [The trailers] are all covered.”

The deal had to be discussed with the district office lawyer, and then went to the vice president to review, which took around two years according to Reid.

“[DC Solar] came out for Earth Day a couple times recently, so we had scheduled an appointment with the vice president and president here to talk to [DC Solar’s] lawyer and president,” Reid told the Current last year. “They gave a five-minute pitch, and we moved forward on it. It all happened as soon as she signed it.”

Although legal assisting major Johnny Garcia said he hasn’t used the outlets yet, he enjoys sitting at the tables and says they are more convenient than the library.

“I think it’s a good use for people cause [more] often than not the library gets very full, and it gets to a point where you can’t find a plug and yeah it’s a little annoying,” Garcia said. “But [with] these, you can actually sit down and enjoy the outside. So if they could also place them around more places with trees that would be a little better.”

Even if students aren’t charging their electronics, students like Garcia may benefit having the tables in other high traffic areas.

“If I had to pick somewhere, I would say more [stations] by the lunch area and maybe … in front of the library,” he said.

According to Reid, any of the other three colleges in the Los Rios Community College District can receive solar trailers for their own campuses since the negotiations were completed.

“[The trailers] could go to CRC very easily,” Reid said. “Now that the contracts are all in place from our district office, Sac City, Cosumnes, and Folsom Lake College can all have these.”

Reid said that signs will be added to the benches for those who are unsure what the outlet stations are or how to use them, and then eventually, umbrellas.

“Right now there’s a couple of them that need some love,” he said. “It’s nothing to do with how wonderful we think they are.”

Campus Pulse: How do you balance school and work?

Be the first to comment on "Renewable energy powers ARC students"