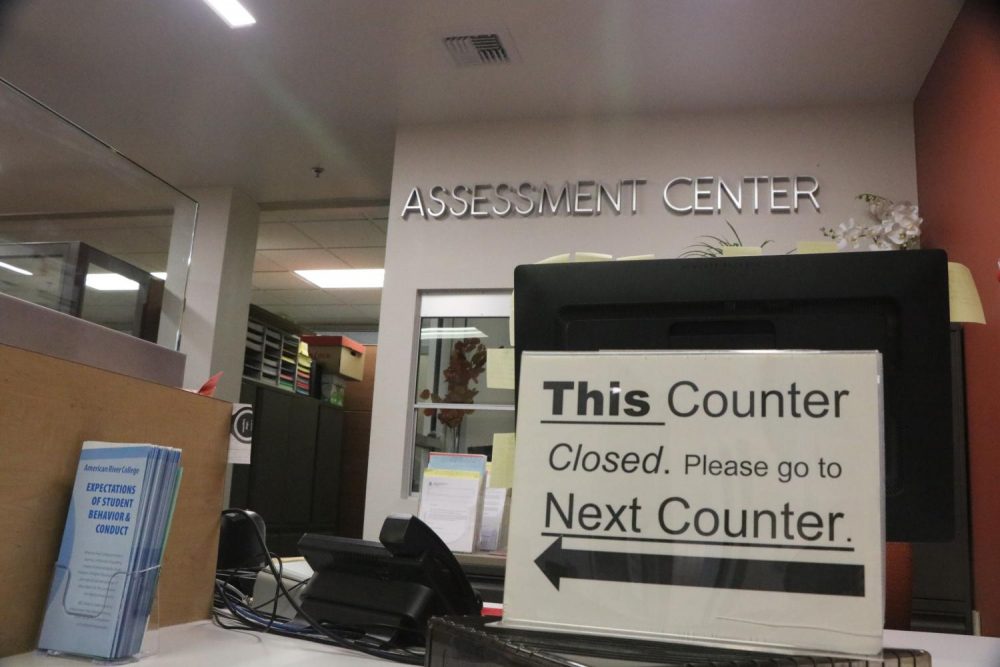 Although the American River College Assessment Center will continue to administer tests in other areas of education, as of Feb. 1, 2019, it is no longer administering standardized placement tests for math or English. (Photo by Jennah Booth)

Students who are starting their general education at American River College this semester will see changes to their English and math level placement with the implementation of Assembly Bill 705, which has reduced the number of available lower level classes as well as eliminated the placement test.

Signed by Governor Jerry Brown in October 2017 and put into effect Jan. 1, 2018, AB 705 is an amendment to Section 78213 of the Education Code, relating to community colleges. It is intended to increase the likelihood of community college students completing their transfer-level math and English requirements within one year, according to the AB 705 page of the California Community Colleges website.

As of Feb. 1, the ARC Assessment Center is no longer administering standardized placement tests and students will no longer be required to take a test to determine their placement in English and math classes.

The bill also “authorizes the Board of Governors to establish regulations governing the use of measures, instruments and placement models” to ensure colleges are maximizing the likelihood of students placing into transfer-level math and English classes and completing them within 12 months.

As of the start of the spring semester, these changes have been fully implemented in the English department.

ARC is no longer offering English classes that are lower than transfer-level and students are now placed into one of two transfer-level English writing classes, based partially on their high school GPA, according to ARC’s Dean of English Doug Herndon.

“This legislation … has the effective merging of the reading department with the English department and the idea is that it streamlines the path through the English composition sequence for students,” Rodgers said.

ARC has gradually removed lower level classes over the past year, including English Writing 50 and 101, according to Rodgers.

The Mathematics Department has also made changes in accordance with AB 705, according to mathematics professor Cindy Bredek.

Math placement is now similar to English, where students will be placed into a transfer-level math class, either with or without support based on high school GPA and the last math class a student has taken.

Unlike the English Area though, there are still lower level math classes available through the Math Media Learning Center (MMLC), for students who feel they need the extra support.

“Nobody will be placed there, but if they feel that they would want to take that, they most certainly can,” Bredek said. “That’s why we want to keep (classes in the MMLC) in place for students who maybe have been gone for ten, 15 years, and they want to get some more algebra before they go on to a transfer-level class.”

The only students who will be placed into lower level math classes are those majoring in the Business, Science, Technology, Engineering and Mathematics and have not taken Algebra 2 (Math 120).

“(Math) 120 is not a transfer-level, but if you are declared to be a science or a business major and you did not have Algebra 2, which is 120, you have to take that,” Bredek said. “That’s really the only time that we would place somebody in a lower than transfer level class. Otherwise everyone gets placed in a transfer-level (class).”

The direct placement of students into transfer-level classes is intended to shorten the student journey through their English and math general education, something that many professors believed was drawn out by the placement test.

“The belief is that if you’ve got lots of levels below transfer, that it really slows down how long it takes students to get to the transfer level,” Youngs said. “A lot of the tests and whatever devices people were using for placement were doing an extremely poor job.”

Rodgers says she believes that the new placement method will provide a more accurate picture of where students should start their English general education.

“We’re not able any longer to use, for the most part, our assessment test … instead they’re using multiple measures, which simply means kind of a mix of more holistic picture of the students’ academic preparation,” Rodgers said. “[T]he assessment test often did give students a lower placement than the new multiple measures placement will give them.”

According to AB 705, “[a]ll community colleges are required to be in compliance with AB 705 no later than fall of 2019.” While ARC only recently implemented these changes, other California community colleges have already seen the benefits of changing the placement process.

Research by the Public Policy Institute of California found that colleges that implemented a high school GPA-based placement process saw increased rates of students placed directly into transfer-level classes, as high as 77 percent for English and 67 percent for math.
“There’s a lot of research that makes me very confident that a lot of students are really going to succeed using this model … it’s kind of undeniable.”

-Doug Herndon | Dean of English
According to Herndon, students who feel they have been placed incorrectly have the option to petition their placement with a Petition to Re-Evaluate your Placement (PREP) form.

“The grade point average and placement process are standard, but there’s definitely a way to challenge that,” he said. “If students feel like they got placed incorrectly, they can go to the Enrollment Office or they can come [to the English Department Office] and we’ll hook them up with everything they need to challenge that process.”

Herndon encourages students who may feel confused or intimidated by the new English placement process to meet with their counselor. In the meantime, Herndon says the English Department staff recognize that students may face unexpected challenges and it intends to watch for kinks in the process.

“I think our concern has always been that there may be students who don’t necessarily succeed in that model and as we work … we’ll figure out how to best serve those students,” he said. “It should work well, it’s just a lot of change for faculty and for students.”