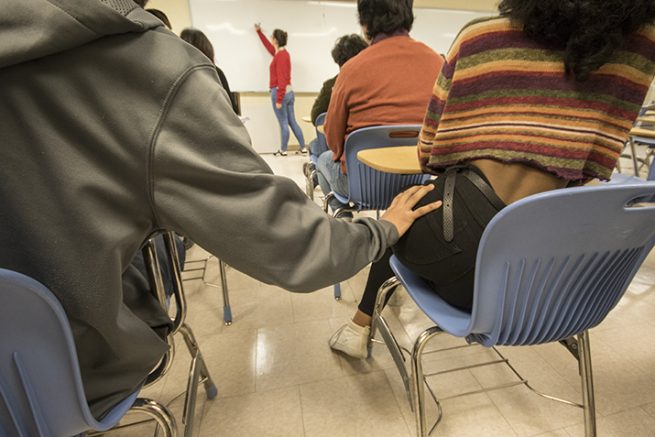 On Nov. 16, Education Secretary Betsy DeVos proposed a controversial new rule to overhaul how college campuses can address sexual misconduct and assault complaints, changing the definition of what constitutes sexual harassment on campus and enforcing “due process” rights for accused students.

The new rule creates three separate categories for sexual harassment, including “[u]nwelcome conduct on the basis of sex that is so severe, pervasive and objectively offensive that it effectively denies a person equal access to the school’s education program or activity,” “quid pro quo harassment,” like a school administrator “conditioning an educational benefit” on a student’s sexual conduct, and sexual assault, according to the official statement released by DeVos.

As defined by previous Barack Obama-era guidelines, the official definition of sexual harassment was less specific and defined as, “unwelcome conduct of a sexual nature.”

The rules involve federal guidelines under Title IX, created in 1972, which prohibit gender discrimination and sexual assault on not only college campuses but also primary and secondary schools.

According to the Office of the General Counsel, American River College has a zero-tolerance policy for any form of sexual violence or misconduct on campus. However, this new rule states that schools are only legally required to respond if the alleged incident occurred on campus or during campus activities and programs.

Sofia Brodskaya, biology major at ARC, said that students should be able to trust that faculty on campus will help students, regardless of where the alleged incident occurred.

One of the more controversial aspects to this new proposal would allow for the accused to cross-examine accusers during sexual misconduct hearings, according to the official statement released by the United States Department of Education.

According to DeVos, under the new rules, hearings will be conducted by a neutral decision maker and with the presumption of innocence. Accusers will be considered innocent until due process proves them otherwise.

Accused students would also be presumed innocent during the disciplinary process and given the right to review all of the evidence a campus collects.

Gabe Ross, LRCCD’s Associate Vice Chancellor, spoke to the Current through email and said these changes could have an impact on how ARC is able to handle sexual misconduct allegations.

“[I]f approved, (the proposed changes) would do a number of things including limit colleges’ jurisdiction under federal law to discipline students for incidents that occur of campus,” Ross wrote. “The proposed rules would also add new requirements for regarding additional hearings, new investigative bodies and more cross examination of alleged victims by the accused and their legal representatives.”

In an official press statement, DeVos said the new overhaul would make Title IX complaints more reliable for all parties.

“Every survivor of sexual violence must be taken seriously, and every student accused of sexual misconduct must know that guilt is not predetermined,” DeVos said.

In determining whether or not college campuses took appropriate and proper steps to address allegations, the Department of Education would apply a standard called “deliberately indifferent,” meaning that an institution would be in violation of the law “only if its response to the sexual harassment is clearly unreasonable in light of known circumstances,” DeVos said.

The proposed rules are subject to public comment for 60 days before they are officially finalized.

“The Los Rios District will be submitting comments on these changes during this period, where will express our serious concerns about the impact of theses change on the victims of sexual assault, along with the other potential negative impacts of adding additional layers of investigative process,” Ross wrote.

“Everything will Disappear” showcases unconventional photography at Kaneko Gallery