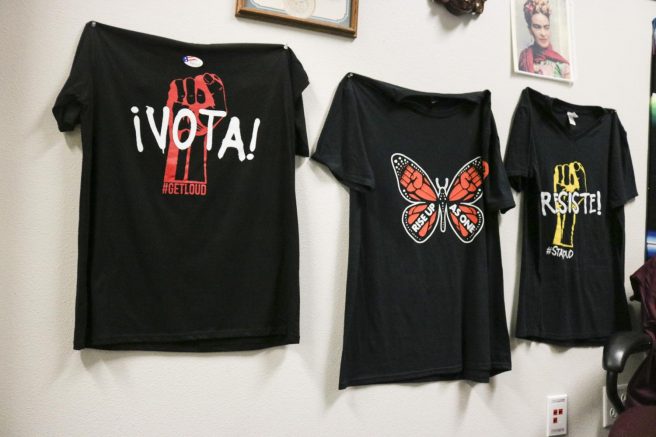 T-shirts that read “Vota”, “Rise up as One” and “Resist” hang in the Puente counseling office in the Hub to raise awareness for immigrants rights and presence on campus at American River College on Nov. 26, 2018. (Photo by Christian Sutton)

On Oct. 30, President Donald Trump’s administration said they planned to prepare an executive order that would revoke the birthright citizenship for children of immigrants in the United States.

The proposed executive order prompted immigration counselors and other professionals at American River College to weigh in on the impact that the order could have on the immigrant student population and policy at ARC.

Veronica Cano Chavez is a student personnel assistant for the UndocuScholar Resource Connection in the Student Center and an academic resource for undocumented students. Cano Chavez said that Trump’s proposal would not affect recipients of the Deferred Action for Childhood Arrivals (DACA) program.

Then-U.S. Attorney General Jeff Sessions announced the Trump administration’s termination of DACA in September 2017. This immigration policy granted some individuals who were brought to the U.S. illegally as children a renewable two-year period of deferred action from deportation. Additionally, DACA gives those children eligibility to work with a work permit in the U.S.

However, Trump’s proposed executive order to eliminate birthright citizenship may impact students who receive Assembly Bill 540 benefits. AB 540 gives in-state tuition charges to undocumented students, or to those who are born in the U.S. and have immigrant parents.

Cano Chavez said that although this won’t affect her legal status, she is concerned that it will affect the students she works with.

“I will be affected if this were to pass, but I am remaining calm and optimistic that this proposal will not pass,” Chavez said. “I am not spending any of my precious time worrying about this terrible proposal.”

Cano Chavez added that students have asked her if she thinks this executive order will pass. Her response is that she’d like to instill hope in students that it will not pass. She said she thinks the proposal is completely ridiculous and undermines the 14th Amendment, which grants U.S. citizenship to anyone born within its borders.

Not all AB 540 recipients are undocumented; some are legal permanent residents, visa holders and even U.S. citizens who have lived or gone to schools out-of-state, according to Chavez.

According to ARC’s website one of its resources for immigrants is the Puente Project, which has a mission to increase the number of educationally underrepresented students who enroll in four-year colleges and universities.

Manuel Ruedas, who has been a Puente transfer counselor for undocumented immigrant students for more than 30 years, said he worked with undocumented students prior to AB 540.

“I work with undocumented students on a daily basis, whether they are DACA [recipients] or not,” Ruedas said. “This has a very negative emotional affect and increases the fear of deportation. Now that DACA has been temporarily cancelled and challenged in the courts, new students who would qualify cannot apply.”

Ruedas said he thinks the proposal would be challenged and shut down because the 14th Amendment grants citizenship to anyone born in the U.S. He said he thinks immigrants are being “used as pawns” in this process.

“I think the Trump administration uses immigrants as a political ploy to increase voting among his [supporters],” Ruedas said.

Zeida Martinez, psychology major and treasurer of ARC’s Puente Club, echoed this perspective and said she thinks Trump’s proposal is a way to try to upset immigrants and that Trump underestimates the power of immigrants as Mexicans and as minorities.

“I’m first generation — I’m a citizen because I was born (in the U.S.) and my parents are not citizens,” Martinez said. “That [order] could affect a lot of services indirectly, like financial aid.”

Despite the fear this proposal creates, Martinez said she is motivated and has a message for other college students who are immigrants.

“It takes an emotional toll, but you can flip that and use that as motivation to continue school with whatever degree you are aiming for and apply [those emotions] in that way,” Martinez said.

Professors weigh in on the impact of video games