Building left unused by district since 2012 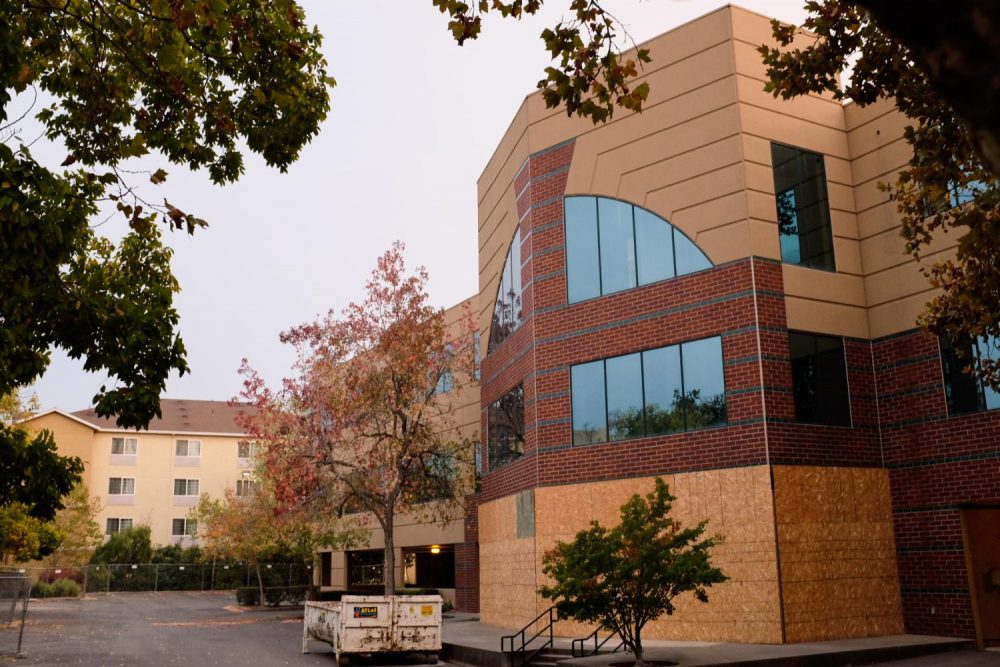 A boarded-up and fenced-off building, owned by the Los Rios Community College District, sits at the corner of Tribute Road and Exposition Avenue. It has been owned by the district since 2012 and was originally considered to replace the Workforce and Economic Development Center according to the California Assessor.

Gabe Ross, Associate Vice Chancellor, and Communications and Media Relations for LRCCD, was not involved in the decisions regarding the building, but spoke on behalf of the Board of Trustees about their decisions.

The decision to allow the law enforcement agencies to use the lot was predicated on the basis that their presence would prevent vandalism of the property, according to Ross.

The cost of bringing the commercial building up to the California Division of the State Architect’s standards is what prevented LRCCD from renovating the building for student use, according to Ross.

Mario Rodriguez, Associate Vice Chancellor of Finance for LRCCD, is involved in the financial decisions of the Los Rios district. He wasn’t directly involved in the decisions to purchase the building however has knowledge of the processes which the district uses when purchasing facilities.

The Los Rios Board of Trustees determined that rather than bringing the Tribute Road building up to code, to instead remodel the current Workforce and Economic Development Center building, according to Ross.

After the decision was made to renovate the current Workforce and Economic Development Center, the Board of Trustees made the decision to keep the building for different purposes in the future, according to Ross.

“The district always wants to keep all our options on the table, with regards to facilities, and the goal is to maximize resources that we can use for students,” Ross said. “There are different standards for administrative functions than there are for any functions with direct student interaction.”

Building codes for facilities, which are used directly by students, are more costly for the district compared to codes regarding administrative functions. Because the building codes are more lenient with administrative functions as opposed to direct student access, the district is free to use building for a variety of options that still benefit students. One option, noted by Ross, is to use the facility to expand the district’s online resources by creating more office space for administrators who work on the online facilities offered by Los Rios.

“There’s not a final plan, we want to be really knowledgeable and make sure we’re making the right decision with any asset of the district,” Ross said.

In 2000, the School Facilities Local Vote Act, also referred to as Proposition 39, allowed for the use of bonds by school districts for “repair, construction or replacement of school facilities,” if the projects are approved through a local vote.

The building was purchased using bond funds through Measure M, which voters approved in 2008. Measure M is a bond proposition for $475 million for LRCCD to “improve student academic performance by building classrooms, facilities and labs throughout the district.”

The projects proposed in Measure M for district wide improvements are to modernize or replace the Workforce and Economic Development Center and to expand the District Office.

Rodriguez explains that any decisions made by the LRCCD about purchases of facilities must go through the accrediting body and the State Legislator. The purpose of these checks is to ensure that anything built by the district goes through the Board of Trustees and its constituents and is consistent with their goals.

The building on Tribute Road went through these checks and was approved for purchase through the Measure M funds as a Workforce and Economic Development Center building. Since the decision to improve the current center on Ethan Way, the board has since decided to use the building to “Modernize and Expand the District Office and Make Infrastructure Improvements,” in accordance with the project lists proposed on Measure M.

“The theory is that anything you build should be laid out in your facilities master plan,” Rodriguez said.

“We’re doing the minimal amount in terms of maintenance,” Ross said. “[To make sure] we’re being wise with resources until such time that we have a concrete plan.”