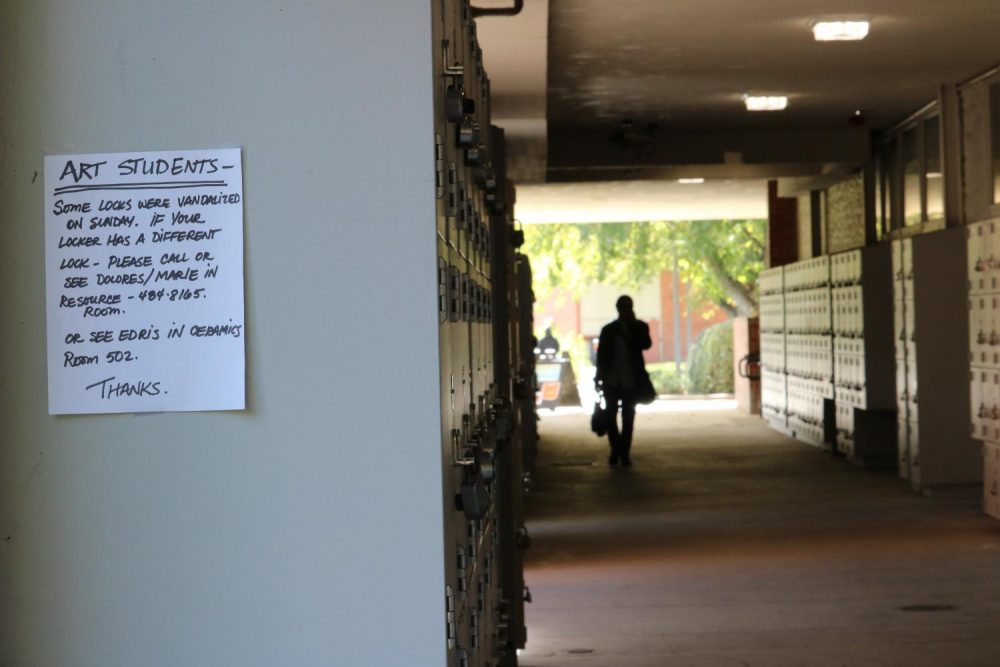 Signs were posted throughout the Fine and Applied Arts Department warning students about the lockers which were vandalized on the weekend of Oct. 12, 2018. (Photo courtesy of Luis Gael Jimenez)

Public Information Officer Scott Crow and those who work in the art department also said some classes were in session when the incident happened, but nobody was around the lockers at the time. Metal chain locks were broken to get into the lockers.

According to the staff in the Fine and Applied Arts offices inside, the same lockers were broken into the next day during the afternoon.

Crow also said that there were a number of locks cut in the arts area. There were two reported thefts from the locker break ins: a canvas bag from one locker and art supplies from another, according to Crow.

“The locks have been replaced and the Los Rios Police Department is still looking in to the situation. They will continue to monitor the area,” Crow said.

Bernice Foster, an administrative assistant in the Fine and Applied Arts Department, said that the LRPD will be putting up surveillance around the area along with patrolling the area in and around the art buildings.

Angela Milano, the Interim Dean of the Fine and Applied Arts Department, had no information other than that they “are looking for ways to increase the security and safety in the area.”

The LRPD have not found any suspects regarding the matter.