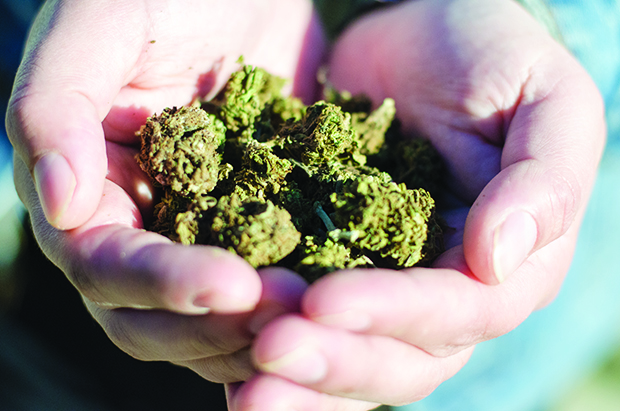 Larissa Lopez rolls out of bed, eyes bleary and heavy-lidded. She is tired and she is stressed; her mind is running a mile a minute and won’t slow down. She rubs her eyes, and stares at the floor for a long-moment.

Her alarm still blares in the background as she stumbles across the room.

Lopez, a sociology major at American River College with a nutrition class looming at 9 a.m., has an assignment due and a lecture to sit though.

It’s going to be a long day.

Her morning routine is a blur of muscle memory.

Still half-asleep, Lopez takes a deep-breath before she sits down and lights up a bowl — there’s nothing stopping her since recreational marijuana was legalized across the state on Jan. 1, 2018.

She works at a dispensary so she knows it’s the good stuff — the best stuff.

It’s not something she does everyday, but it’s something she’s done in the past when she knows she needs to concentrate.

She takes a long drag from the pipe, releases a cloud of smoke, and closes her eyes for a moment.

Lopez can feel her mind easing, focusing. She opens her eyes and takes another hit, before she continues to prepare for the day with a newfound motivation.

On Nov. 9 2016, Proposition 64, “The Adult Use of Marijuana Act” passed in the state of California legalizing the recreational use and growing of marijuana for personal use.

In continuation of Prop. 64, the sales and taxation of cannabis across the state became legal on Jan. 1, 2018.

That means that if you are 21 years of age or older, getting access to marijuana is as simple as finding a reputable, licensed-dispensary near you.

This causes a controversy between those who have been smoking marijuana for medicinal purposes, and those who using the drug after its legalization.

“Definitely like a whole new different type of people, in the sense that we have people who have never even stepped foot into a cannabis facility,” Lopez said.

The ease of access has created a dilemma for the Los Rios Community College Administration and the Los Rios Police Department because, although weed is legal in the state of California, it is still illegal at the federal level.

Gabe Ross, Associate Vice Chancellor of Communications & Media Relations for Los Rios Community College, said the problem is one that is out of the hands of Los Rios officials.

The Drug-Free School and Communities Act requires schools to implement a drug prevention program in order to qualify for receiving federal assistance.

“At the end of the day federal law trumps everything else,” he said.

According to Ross, marijuana will be treated much like alcohol has always been treated by school officials: as something that only exists off-campus and is heavily restricted within school grounds.

The California Health and Safety Code also restricts the use of marijuana to private property and state-licensed premises. The law bans the consumption of marijuana within a thousand feet of a school, daycare or youth center — ARC serves as both a school and a daycare.

In an email interview with the Current, ARC President Thomas Greene said that any student found inebriated on campus faces immediate disciplinary action from either school officials or the Los Rios Police Department.

“It depends on the circumstances. It could be a potential student discipline issue or it could be a law enforcement matter, depending on the situation,” Greene said. “The Office of Student Conduct has a wide variety of resources available on this and other issues.”

ARC’s official code of conduct outlines varying levels of punishment ranging from suspension, expulsion and/or criminal prosecution, depending on the severity of the infraction.

Greene added that carrying cannabis onto school grounds can result in the same punishment — even in liquid or edible form — adding that these laws apply to all Los Rios schools, not just ARC.

With the school grounds being considered a ‘smoke-free campus’ it seems that marijuana has no place at ARC — or any of the other Los Rios campuses.

Ross said that he feels keeping district schools drug-free creates a better environment for everyone.

“We want to make sure our campuses are safe for our students and staff,”  Ross said.

But for students like Lopez, the rules — as inflexible as they are in the eyes of administration — are still a bit hazy.

“Well since this is already a non-smoking facility, I would say it wouldn’t impact it too much,” Lopez said, “ but I would still feel like since people don’t know the laws they’re gonna wanna take a smoke outside or something. I think people will be wanting to try it and maybe bring it to campus.”