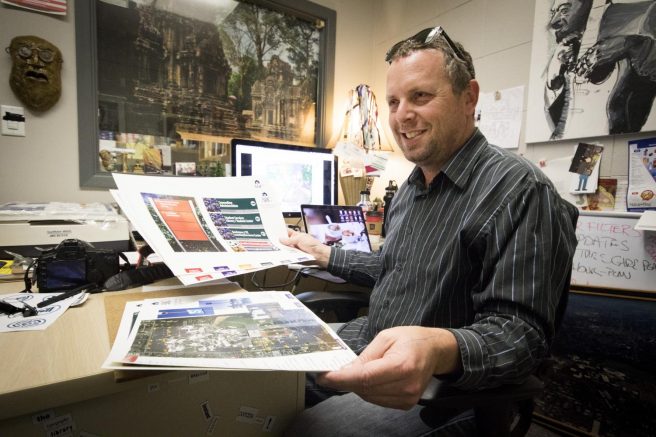 American River College Printing Services Supervisor Don Reid holds up a prototype for the new campus maps that he is working on. (Photo by Ashley Hayes-Stone)

Printing Service Supervisor Don Reid and retired Vice President of administration Ray DiGuilio, have just concluded a meeting American River College’s Administration building, and have begun packing up their belongings. DiGuilio puts his jacket on and places his hat upon his head, he has a briefcase clasped in one hand and the handle of his rolling backpack clutched in the other, the two men head out to their separate vehicles.

“Hey, can I help you with your stuff?” Reid asks.

“Oh, where are you parked?” replies Reid.

Reid has worked at the ARC campus for 20 years, and in that time has not heard of this particular parking area.

And, so, without a second thought he asks, “Where’s Lot X?”

Reid must acknowledge the irony of this question, as both men are members of a committee designed with the sole of purpose of remodeling the campus maps and have just left a meeting in which they were discussing signage and the difficulties of directing people around campus.

“The president [of the college] called for an expository kind of committee to go take a look at what it would take to redo our signage,” Reid said.

Reid was joined by Vice President of Administration, Kuldeep Kaur and Administrative Services Director Cheryl Sears to create a new system to navigate around  the ARC campus. Later, DiGuilio  was asked to lend his expertise on the subject as well.

DiGuilio,came out of retirement to help with this project.

“Under his administration that we put up that last series of signs, the last revision of signs, I think it was about 10 years ago,” Reid said. “It was advantageous to have his expertise on the assignment,” he added.

DiGuilio has gone around to different campuses to take pictures to model ARC’s new system off of. And Reid is endeavoring to create a practical application.

Reid took a photograph of all of the signage on the campus and then Geotagged each location using Google maps. This included every visible sign on campus, all of the parking signs, building signs and all the maps on a post.

“He was talking in vagaries and I was kinda coming in with the details of it all,” Reid said.

According to Reid the new system will make it easier to navigate across campus and, working with the redesign of ARC, it will create pathways and more descriptive routes to highly populated locations.

Each sign will also include an arrow pointing to the location of the building or department the students are looking and a picture to help identify what that department houses, like a soccer ball for the Health and Kinesiology, for example.

It is one of the goals of the committee to create a more interactive experience for the students. One way the maps will become more interactive is with the introduction of QR codes. Once scanned, the code will bring up a map on the phone.

The committee will be working in conjunction with ARC’s Design Hub in designing the QR code.

“We have worked with some people who have 3D printed QR codes, so that’s one thing we want to help work with,” said Randy Schuster, a professor in Design Technology at ARC.

The Design Hub is also interested in helping with other aspects of the signs.

“We’re gonna try to make a phone app,” Schuster said.  “Our goal is to integrate a phone app with that, that will make it easier to navigate than even looking at Google walk.”

This projected phone app would show images taken of the buildings and provide students with a guided tour as they transverse the campus.

According to Reid this project has been a long time coming, and with the campus redesign it is the perfect opportunity.

No butts about it: artist reimagines the ‘historically unaesthetic body part’