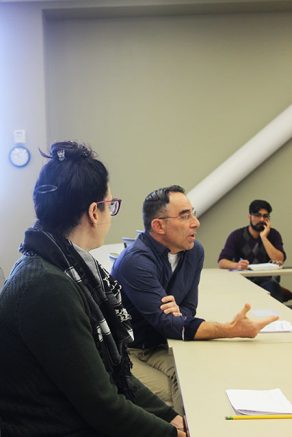 At the Student Senate’s March 16 meeting, Members of the Boycott, Divestment, Sanctions movement presented their case to the board about a prospective divestment resolution.

The group’s representatives said they hope that the board will draft a resolution denouncing alleged occupation and colonization of Palestinian land and divest the school’s finances, or investments from any companies that do business with Israel until they comply with international law.

Chris Yatooma was on hand to present his point of view as well as BDS member Amanda, who asked the Current not to use her last name for privacy and “security” reasons.

BDS is a Palestinian-led activist group that believes Israel is an apartheid state that denies Palestinians their rights.

Yatooma explained how the movement was founded a little over a decade ago.

“This is what the BDS movement is all about; our government currently funds this Israeli occupation and has really done nothing over the last 50 years to end this, so 10 years ago Palestinian civil society decided to step in and ask groups, churches, student groups, union activists, others-to apply economic pressure through boycott, divestment and sanctions,” Yatooma added.

Student Senate President Valencia Scott cautioned the board to inform themselves about BDS before formulating a position.

CAEB President Justin Nicholson pointed out that the board can’t abruptly adopt positions unless the topic impacts ARC students in some way.

“I just want to caution everyone that we are not actually able to take a stance unless we can prove that there is merit and definite need amongst our student body,” Nicholson said.

Amanda countered  that “this absolutely of course is going to affect students of Palestinian descent, but not just those students. A recent law has been passed [in Israel] that anybody advocating for BDS will be turned away at the border.”

No BDS resolution was adopted at the meeting, but a deadline was set for spring to look into the issue and potentially form a resolution.

Members of the board unanimously passed a joint resolution with ARC’s Classified and Academic Senate to reaffirm their commitment to social justice.

The resolution commits the school to stand by all of its students, whether they are documented or undocumented, worried about the national discourse and rhetoric surrounding the White House’s executive orders that deal with immigration.
It also reaffirms the school’s principles of inclusion, non-discrimination and equal access for all students.

Pride Center offers guidance to being an ally to LGBTQ+ community

Be the first to comment on "Boycott, Divestment, Sanctions movement lobby Student Senate for divestment resolution"