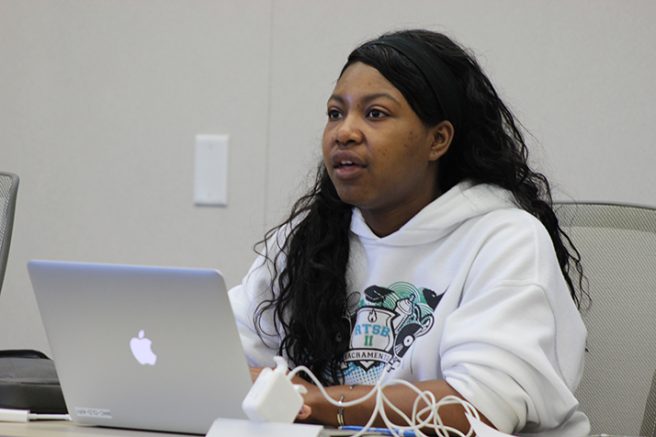 ASB Student Senate president Valencia Scott speaks during a Senate meeting on Feb. 16, 2017 at ARC. Topics discussed during the meeting included a parking fee increase, the creation of a meditation center, and funding for ASB elections. (Photo by Mack Ervin III)

At the Student Senate’s February 16 meeting, the senate’s president Valencia Scott read a draft of a joint resolution to designate ARC as a “safe zone” for students who have been impacted by the recent rhetoric and executive orders from the federal government because of their place of origin, religious or ethnic identity.

The draft would reaffirm ARC’s commitment to support the principles of inclusion and sanctuary for all employees and students and keep its doors open to students “regardless of economic standing, race, ethnicity, sex, gender identity, sexual orientation, religious beliefs, immigration status, disability or other categories,” according to the document.

Student Senate partnered with Academic Senate and Classified Senate to jointly write the draft, which is still a work in progress according to Scott.

“This is basically a mock-up. This is draft number two. It still needs work and adjustment just because events and changes and policies are so fluid at this time and everything is kind of up in the air,” Scott said.

The resolution wasn’t the only item on the senate’s agenda. In the meeting, Student Senate Advisor Juan Blanco announced to the board that an ITC Systems GoPrint printing station has been ordered for the Student Center.

The GoPrint station will be connected to computers in the Center for Leadership and Development and the Hub, Bianco said.

Blanco added that he hopes the printer will be delivered by the end of March and that he will provide the board with more information as it becomes available.
The board also continued its discussion about the parking free increase starting this summer, and delegated responsibility for communicating the details about the increase to students.

‘Prostitution is not funny’

Heroes and villains at club day