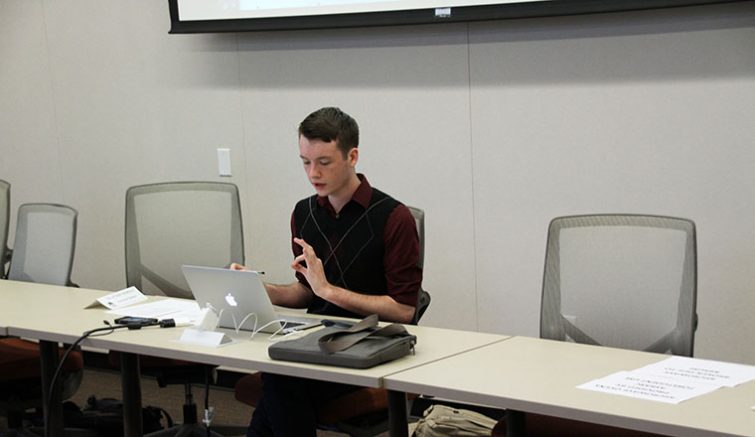 CAEB President Justin Nicholson addresses the Student Senate at their meeting on November 3.

CAEB President Justin Nicholson announced that ARC’s next Club Day will involve a canned food drive, winter coat drive and that all members of Student Senate will be required to participate in at Thursday’s meeting.

“The goal of this is to start to mitigate the deficits that we have with student hunger and things like this,” Nicholson said.

“It’s going to be a larger Clubs Day because of the canned food drive and the coat drive that we’re trying to put together, so we are going to need all hands on deck,” he said.

Advisor Juan Blanco announced that a delegation of six will be attending the General Assembly of California Community Colleges on November 11, 12 and 13.

“Out of the district, there is going to be Sac City, ARC of course and Consumnes River College. So, three out of the four colleges will be attending GA this time around. As you know, it is going to be hosted in Sacramento in the McClellan Center and so we’re really excited about GA. I know I am,” Blanco said.

“It’s a great way for us to.. at least for me as an advisor to rub elbows with those advisors and see what resolutions their students are working on. I am going to use that time to shoulder tap on resolutions on food insecurities and food pantries, or how they’ve done that,” Blanco said.

Without any objections, Nicholson appointed himself as well as Senator Julian Lopez and Senator Fatemeh Mehraban to the committee.

Senate continued their discussion on Resolution F16-02 to support Prop 51 with a letter of endorsement.

Prop 51 is a bonds initiative that would fund improvements and construction of school facilities for K-12 schools and community colleges.

“In the last 5 years or so, the buildings that have been built on this campus with the last school bond are the parking garage, this building, the culinary revise, arts and sciences and now we’re coming up with a STEM building, and so that’s the kind of construction that we do with this kind of money,” Senator Laurie Jones said.

“We know that for instance Davies Hall greatly needs revision, we have a new fashion professor and even though the building is new, she’s used to double the space that they have in there now, um, we did get a new soccer stadium but you know, we have great physical building needs on campus and I think that this proposition would greatly help to meet those needs,” Jones said.

With no objections, the board voted five to zero to support Prop 51.

Short-staffed and with new members, Student Senate is struggling

Hair and heritage: Embracing a natural part of me