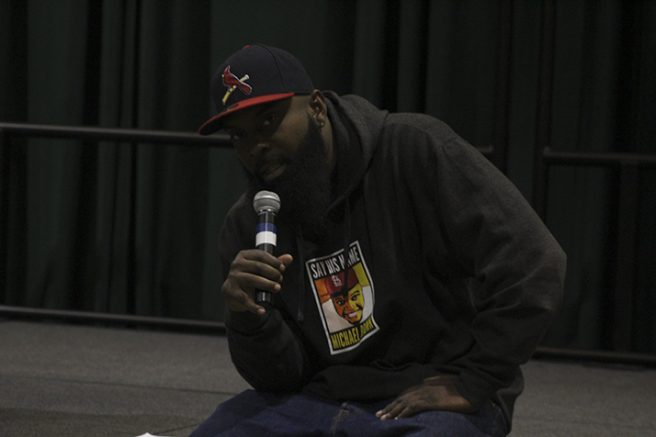 Michael Brown Sr. answers a question from audience member after his speech at Sacramento State on Oct. 20. Brown Sr. talked about his son's death and how he deals with the aftermath. (Photo by Mack Ervin III)

“Close your eyes and imagine losing a child. Imagine they’ve been murdered. Now open your eyes. That’s my reality.”

Brown relived the story of the night he learned his son had been killed by a police officer.

They rushed over to the crime scene and the police officers wouldn’t talk to them.

Brown was only able to get information for the people in the community in which he lived in.

He described how his son’s dead body lied on the ground for four hours in 98 degree weather.

“The police showed us no respect. That day was so disrespectful. They never said anything to us. They didn’t let us see him” Brown said.

The Brown family wasn’t able to go identify the body. 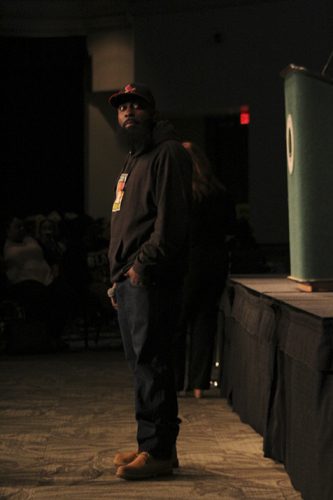 Michael Brown Sr. looks up at a screen displaying images of his son Michael Brown during a speech at Sacramento State on Oct. 20 in Sacramento. Brown Sr. relieved the day his son was shot and killed by police and talked about how he copes with the loss of his son. (Photo by Mack Ervin III)

“The police identified the body to cover up more evidence and more dirt they were trying to hide,” Brown said.

Brown said he decided to do some investigating by himself, so he could learn what actually happened.

“Why did they take my son away from me?” Brown said.

He started asking people in the community questions to learn more about what happened that night.

He learned the police officer called Michael the N-word and a punk.

“(The police officer) ran over his foot and shot the gun. He blew off his thumb. He got scared and ran … the police officer caught up to him and told him to get on his knees. Then he shot him three more times after he (complied).”

Brown refused to look at autopsy photos and any other social media pictures of Michael’s dead body.

The Brown family decided to have a private wake because Michael was so “disrespected” and he didn’t want people taking photos of Michael’s body.

“The first time I saw him was at the wake,” Brown said. “I wanted to remember him smiling.”

Michael’s death is still affecting the community and is plaguing Ferguson’s citizens with fear.

“There are still children over there scared of the police and thinking that they are next.”

Taylor Grant, Sacramento State student, shared the impact that Michael Brown’s death has had on him.

“Michael Brown’s death changed my life,” Grants said. “I think about life before Michael Brown was killed and after. It was definitely a turning point in my life.Your son didn’t die for nothing. We won’t forget it. Our generation is fighting for the Black Lives Matter movement.”

The negative imagery that was associated with Michael’s death forced the Brown family to not pay attention to the media.

“I don’t trust the media. They don’t get paid off the truth. They associated my son with those riots. He didn’t have anything to do with that. They could’ve said something positive. But that’s not what they get paid to do,” Brown said.

Brown used the murder of his son to focus on youth development and change his community. Additionally, he founded the Michael Brown Foundation, a nonprofit organization used to empower black youth across the country.

“I’ve adopted one school so far in Missouri. We like to let the children know that somebody cares about them,” Brown said.

The Chosen Fathers organization is a group of fathers who have lost children due to police brutality, gun violence, and racially motivated crimes, including Trayvon Martin’s father, Jordan Davis’ father, and Oscar Grant’s father. 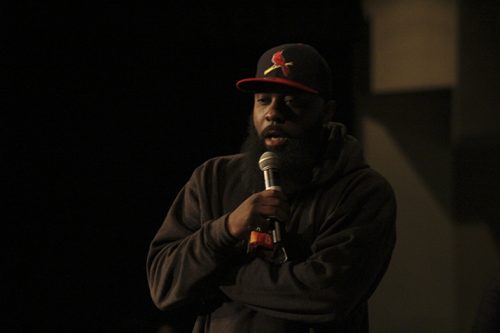 When asked about how young black children are reacting to law enforcement and how we can shape their mindsets to something more positive, Brown began sharing how his children have reacted to the death of their brother.

“I have three boys and mentally they know that the police killed their brother. And in their minds they think when they get older they need to go and kill police officers. But they’re young and their minds aren’t set. We can rebuild our communities” said Brown Sr.

Brown Sr. felt like he could use what happened to his family and spread awareness and give guidance.

“I’ve been going to see a lot of families who have lost their children I feel like my mission is going out to help other families.”

When asked what was something about Michael that most people don’t know, Brown smiled and said his son liked to rap, he was great with his hands, and he can take anything apart and put it back together.

“A lot of people don’t know that. He is my best friend. He was the best man in my wedding. He was more to me than my son and I feel him all of the time. He’s in my dreams,” Brown Sr. said.