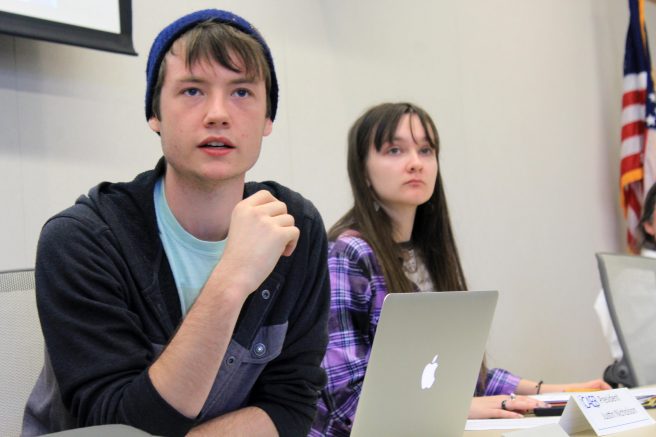 Clubs and Events Board President Justin Nicholson (left) with vice president Mary Stedman (right) listen to the board discuss the theme for next semesters Murder Mystery Dinner at the Oct.11 meeting. (Photo by Robert Hansen)

The American River College Clubs and Events Board (CAEB) agreed on a roaring ’20s theme for the Murder Mystery Dinner at today’s meeting.

The Murder Mystery Dinner is an interactive comedy show with dinner where audience members try to figure out which performer is the murderer.

“We have a lot of work to do if we want to get this to happen in March,” said Justin Nicholson, CAEB  President.

Nicholson suggested a 1950’s or a sci-fi theme to the board but, for simplicity, vice president Mary Stedman and student senate president Valencia Scott thought the 1920’s theme would be best.

“Especially since we’re already a little behind on this,” Stedman said. “I feel like 1920’s or 1950’s would be easier to put together.”

Stedman said that while volunteers have been available to help with props, other props would be more easily found for 1920’s than a sci-fi theme.

“We need to do something a little more simple so we know it’s going to be successful,” Stedman said.

Scott agreed saying that the storyline for a 1920’s theme would easier for all the participants.

“I agree … the archetypes are already there,” Scott said. “Those are storylines that require a little less explaining.”

The goal is to have Murder Mystery Dinner sometime in March or April, according to Nicholson.

“We will be contacting different locations to rent out the space if we can’t do it on campus,” Nicholson said.

Nicholson stressed to club representatives the importance of fictional costumes.

“I can’t say fictional enough,” Nicholson said. “Please don’t make it something a monster that looks too realistic. It’s a monster mash, so it’s supposed to be a comical take.”