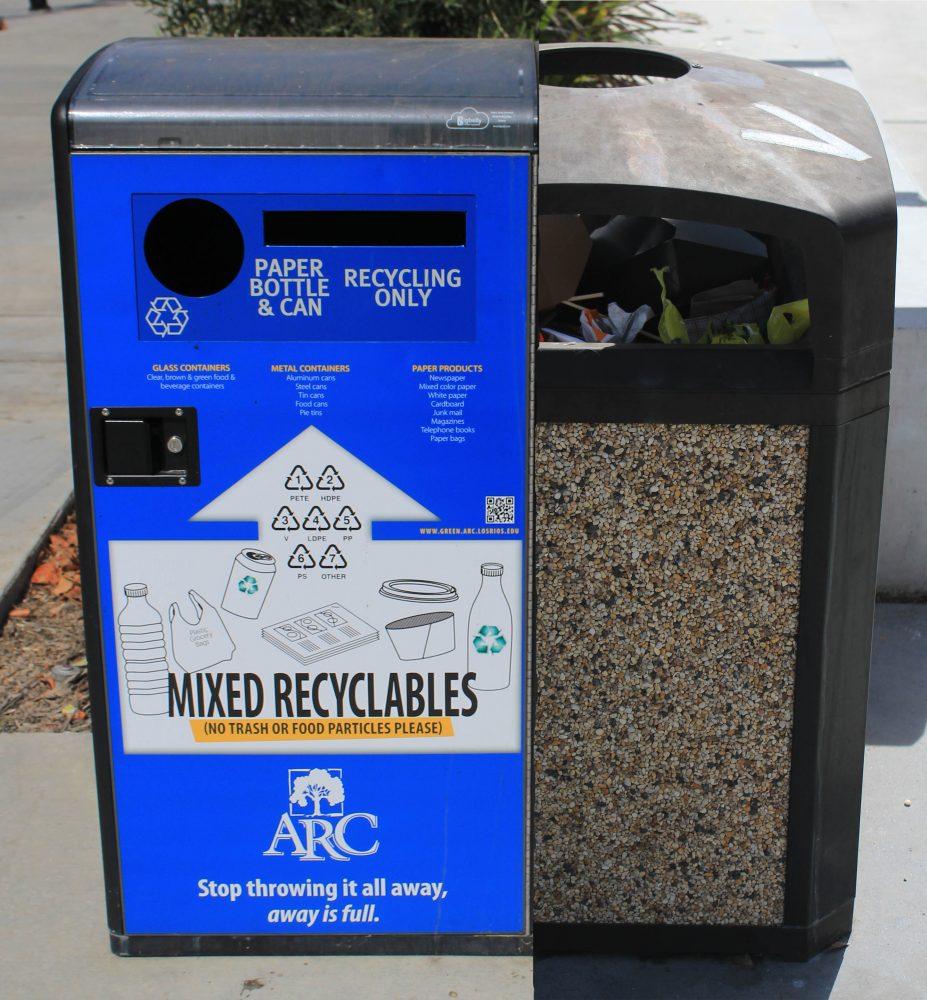 A recycle station and a trashcan both near the Student Center on Oct. 13. A recent audit by sustainability at ARC found the campus could not meet the goal of 75 percent diversion by the year 2020. (Photo by Robert Hansen)

A sample of American River College’s diversion rates reveal the campus is below the mandated goals per AB 75 and AB 341 which are designed to help meet California’s recycling goal of 75 percent by the year 2020.

Diversion rates measure the amount of landfill waste that is disposed of by other means such as recycling, reusing, or composting.

The sample showed that diversion rates for ARC’s campus before sorting was 39.5 percent. After sorting, 68.8 percent of landfill waste was diverted which means the mandated goal will not be met if this trend continues.

This audit was conducted by Printing Services Supervisor Don Reid and a team of ARC faculty. Waste and prep from Aramark after the Fall 2016 Convocation as well as from around the Student Center was gathered for this sample.

“Of the 120 pounds of trash that was generated, 30 pounds of coffee grounds,” Reid said. “I bought 500 bucks worth of stuff … for a team of people to do this hopefully for every convocation.”

Over the summer, Reid and his team attended the California Higher Education Sustainability Conference (CHESC) at CSU Fullerton where they improved their proper green waste management.

“At their (CHESC) event, there was so little actual trash that next year they won’t even have garbage cans out,” Reid said on the ARC sustainability page. “They were just used incorrectly with only 64 pounds of 776.5 pounds being truly landfill for a 92 percent diversion rate.”

14 Max-R recycle stations, two Big Belly recycle bins, a Silver Recovery system and a can puncture station can be found around campus.

“While these have been a great help, we need to do more,” Reid said.

The report recommends adding more recycle/landfill stations for inside and around the Cafeteria, one of the heaviest trafficked areas on campus.

“I would love it if there was a kind of ‘separate your recyclables’ / ‘know what goes where’ type of campaign to get students to know what goes where,” Reid said in an email. “I can’t emphasize how important this one really is…I really am crying for help here as our diversion rates won’t budge unless we can change the mindset and get people to try.

Other ways for students and faculty to help are by getting involved, staying informed, sharing recycling practices with your office at future department meetings, emptying your small recycle bins into a common area larger one when they are full, or by asking the cafeteria to use compostable materials for your next catered event according to informtaion taken from http://green.arc.losrios.edu/offices

President Thomas Greene was unavailable for comment at the time of the report.