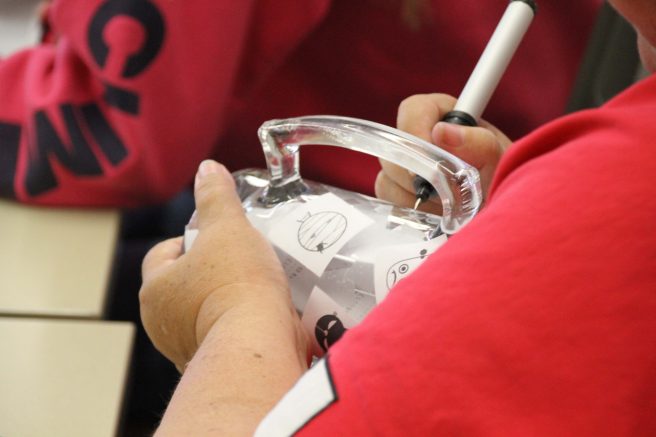 American River College CAEB WHIP Teresa Bergman edges a design on a mug before the October 4, 2016 meeting. The mug will be a prize at the upcoming Club Day on October 20, 2016. (Photo by Robert Hansen)

American River College’s Clubs and Events Board (CAEB) discussed a monster themed Club Day, a murder mystery dinner and made the suggestion to use monsters to represent the clubs during their meeting on Oct. 4.

As the Oct. 20 club day approaches, CAEB members devised a plan, along with the inference from Vice President Mary Stedman, that the clubs should create  monsters that will go along with the theme.

“Let’s have a monster for each club, have the monster be related to your club in some way. The more well rounded that monster the better,” Stedman said.

CAEB President Justin Nicholson stressed that these monsters should not be based after real people.

“It can be any sort of fantastic creature you want, it has to be fictional and if your monster is not fictional or is close enough to a person your club will be asked to remove everything it has for that monster,” Nicholson said.

Director of Activities Ashlee Nicholson said that the clubs have to be able to motivate students to participate in the games that will be played on Club Day.

“If they see people playing these they’ll want to do it too,” Nicholson said.

Engineering Club member Benjamin McNeilly had an idea of creating a three-dimensional jack-o-lantern with LED lights inside of them.

McNeilley also had input on the Murder Mystery Dinner timeline.

“Is it going to be a period piece? Like the late 40s and 50s when mystery was a popular thing,” McNeilley said.

Advisor Juan Blanco added an anecdote about his experience with a Murder Mystery Dinner.

“I’ve attended a Murder Mystery Dinner that had prohibition, they had root beer,” Blanco said.

Nicholson said that he wanted clubs to be involved in the spring semester event, however advised that planning needs to be thorough this semester.

Be the first to comment on "CAEB talks monsters and murder"