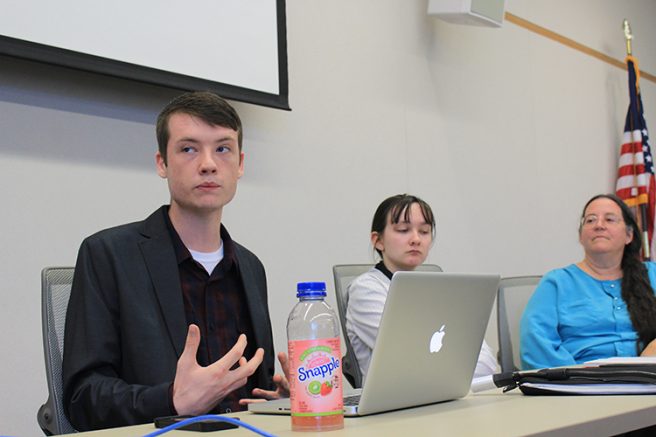 Club and Events Board President Justin Nicholson discusses the Sept. 22 Welcome day as other members of CAEB listen at the Aug. 30 meeting. (Photo by Robert Hansen)

The American River College Clubs and Events Board held their first meeting for the fall semester on Tuesday and discussed bills and activities for “Greek Week,” a Club Day event that will be held on Sept. 22.

CAEB President Justin Nicholson stated that “Greek Week” will be used “to build camaraderie among the campus.”

The “Greek Week” proposal was passed with with no objections.

“It’s an idea to get others together on campus,” Nicholson said of Greek Week.

Nicholson expressed his desire to have Club Day activities that will pique student interest and involvement on campus.

“We’re going to be attempting to work with different clubs to participate, we noticed that clubs were not active.”

Ashlee Nicholson was voted in as Director of Activities, and Bergman as the new CAEB whip.

“I would help put together club day, picking out themes,” said Nicholson.

Stedman and Scott approved, by two votes of acceptance, the addition of the new CAEB members as well as events and bills that were  discussed later in the meeting.

Stedman read the “Incentive Point Allocation” bill, which gives $3,000 to CAEB’s budget for the academic year.

Incentive points are distributed whenever ARC club members participate in events or meetings, and at the end of the year clubs earn money based on the amount of points they earned throughout the academic year.

Nicholson discussed the bill with all members present with no objections. CAEB passed the Incentive Point Allocation Bill, and conversations moved on toward the end of the meeting.

There was no discussion of Club Day funding.

Adviser Juan Blanco mentioned that there will be a “Constitution Day” event on Sept. 15.

“We will be handing out candy and prizes, similar to last semester,” said Blanco.

Proposed CAEB events to be held in the upcoming months include a film festival and a murder mystery dinner.