Supporters line up in the heat to hear Tump speak 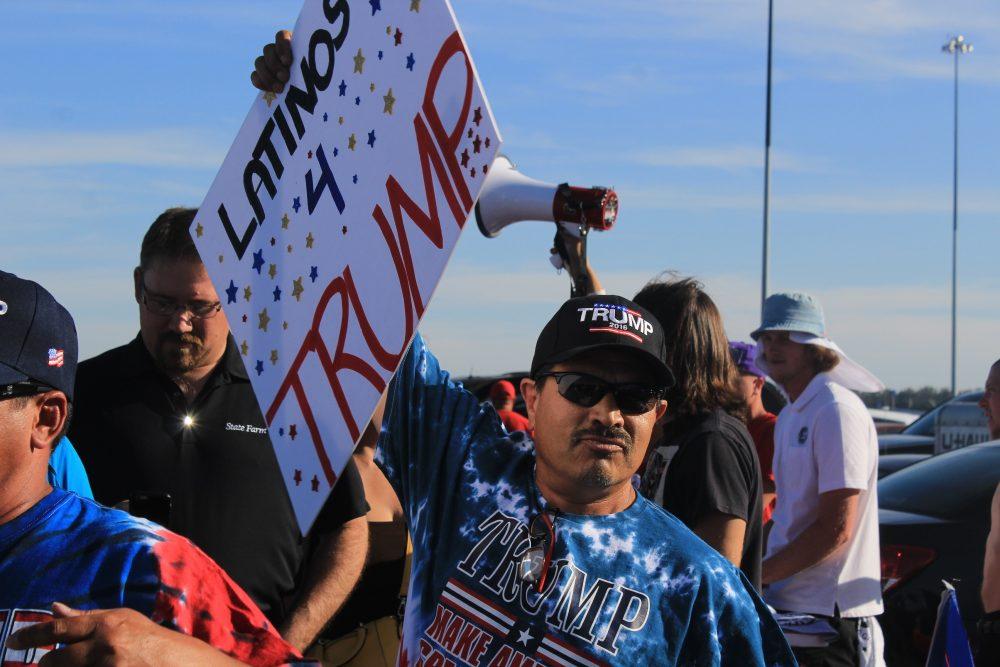 A Donald Trump supporter holds up a sign reading "Latinos 4 Trump" in line to hear the presidential hopeful speak. (Photo by Jordan Schauberger)

By Jordan Schauberger and Robert Hansen

Thousands of Donald Trump supporters waited in the heat to hear the presumptive Republican presidential nominee speak at his rally in Sacramento on Wednesday.

The first attendees started lining up at 8:30 a.m. and Rico Jimenez, drove over seven hours from Orange County to be first in line.

James Terry, who graduated from ARC in 1967, said that he’s been a Republican since he voted for Ronald Reagan.

“I’ve always voted for the best of two bads and this is the first time since Reagan that I’ve had the chance to vote for someone I like,” Terry said.

Terry said that he thinks it’s “common sense” what Trump stands for and specifically pointed to his stance on illegal immigration.

“He’s not against Mexicans, he just wants illegal aliens out of America,” Terry said. “We don’t have a country if we don’t have a border.”

John Angella, who graduated from ARC in 1979, also shared his feelings about Trump.

“I want to support someone who can really make difference,” Angella said. “He’s not afraid to offend in the right away. People need to realize what’s happening in this country.”

He also agreed with Terry about that there are problems concerning the border.

“Our military is being defunded and our borders are wide open. It’s really easy to swim across the river.”

Carol Belden, who is a music major at ARC, thinks Trump will be better for the economy and immigration than Hillary Clinton.

“The current economy isn’t sustainable and Hillary will put us deeper in the hole Obama created,” Belden said. “The biggest thing of his I support is his stance on immigration. I’m all for helping, but not here. They need a safe zone over there.”

There were supporters of all ages and ethnicities in attendance, including 12-year-old Blake Espino who dressed up to impersonate Trump.

Guri Kang, who is an immigrant and Sikh, came out to show his support for Trump.

“I want a president like him,” Kang said. “We need to build America great again. He’s not against immigrants, a lot of Sikhs support him.”

Two years ago Moss’s son passed away from heroin addiction and says he is using this opportunity to “self medicate.”

“I hadn’t been doing anything for two years, I mean I was doing nothing,” Moss said. “(Now) I get to talk about my son.”

Moss said that the first time he heard a Trump speech he was sold.

“I’ve been a Trump supporter since he announced his candidacy,” Moss said. “I’ve never voted before in my life.”

The line has started to form at the #DonaldTrump rally in Sacramento. #TrumpInSacramento pic.twitter.com/Tt8DlURcxJ

Ron Hillard, a merchant, has been supporting Trump since January, traveling from Buffalo, NY to sell Trump merchandise.

He also explained his reasons for supporting Trump.

“He don’t hold back nothing,” Hillard said. “To put it right, he doesn’t have to smooth out anything for anybody. That’s how you know he’s not lying.”