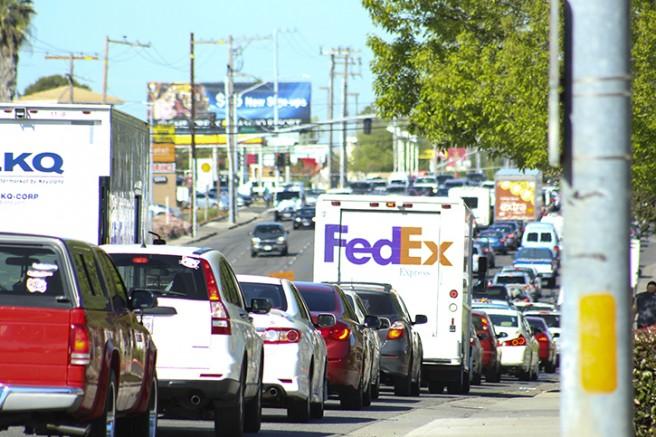 Travelers on Madison Avenue near American River College face traffic delays as PG&E works to fix a gas leak. The leak was discovered on Tuesday but its location has yet to be identified. (Photo by Timon Barkley)

A previous version of this story and teaser falsely reported that the gas leak occurred on Madison Avenue northbound. Madison Avenue runs east to west and the leak closed lanes going westbound.

PG&E crews are trying to repair a gas leak on westbound Madison Avenue between Date Avenue and the I-80 on-ramp that has caused traffic delays near the American River College campus.

Construction began yesterday around 3 p.m. when gas sensors from a PG&E survey truck detected the leak according the foreman Michael, who declined to give his last name.

“We got here around (8 a.m.) this morning and are the second crew to work on it,” Michael said. “The first crew started yesterday afternoon.”

There is no estimation as to when the road construction will be finished.

Rosanne Stephenson, manager for the California Department of Public Health and Nutrition, said she heads to her office downtown very early in the morning, wakes up at 5:30 a.m. and is out the door by 6 a.m.

“Traffic was backed up to Dewey and Madison,” Stephenson said. “Luckily I left early enough and was able to get around the traffic and take a different route.”

“I wasn’t really expecting it because there weren’t signs until Hemlock (Street),” Febanske said. “I don’t usually hit traffic. It’s the most construction I’ve gone through coming to school.”

For Febanske, the traffic was a minor inconvenience.

“(It) was just a little while that I was stuck,” Febanske said.

Nearby businesses said it was slightly affecting normal customer traffic.

Ashley Coleman, the manager at Starbucks on Madison, said the store has only taken a small loss.

“The front has taken a small impact,” Coleman said. “We are usually full in the parking lot though, so just a small amount. The drive-thru is about right though.”

Future Ford on Madison said the incident isn’t hurting it so much, as it isn’t usually busy on weekdays.

ARC student Michael Gonzalez also was affected by the traffic.

“I was on Auburn so I saw the traffic,” Gonzalez said. “Madison on traffic was so packed that I was stopped at a green light waiting for other cars to make it through the light.”

Timon Barkley contributed to this report

Mixed race students open up about their experiences