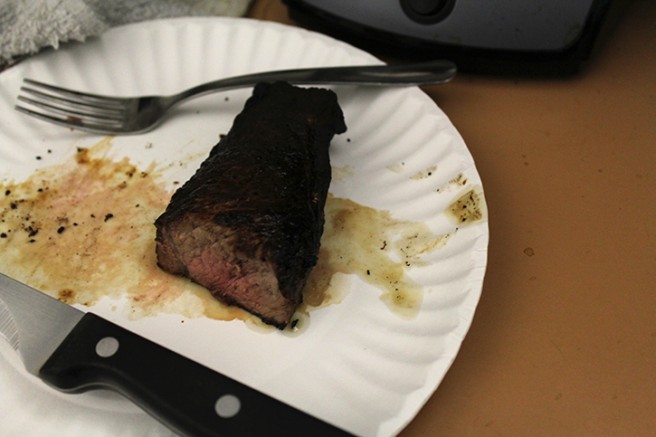 By Robert Hansen and Hannah Darden

A fire alarm roused students and faculty from their classrooms when a staff member overcooked his food in Liberal Arts 152 Staff at American River College at 12:14 p.m. on Tuesday.

The cause of the fire was “just a burnt lunch” according to ARC director of operations Dan McKechnie, who shut down the alarm.

Senior information technology (IT) technician Walter Bennett was warming a steak in a toaster oven when he stepped away to speak to a colleague and forgot about his food.

“The room filled with smoke but there were no flames,” said Bennett.

However, according to McKechnie, the fire alarm program said the alarm originated in the Learning Resource Center (LRC), and it “didn’t seem to be coming from Liberal Arts.”

At the time of the initial alarm, the LRC was undisturbed.

Math 103 professor Paula Rodriguez-Rutten’s class was in the middle of taking a test when the alarm went off. 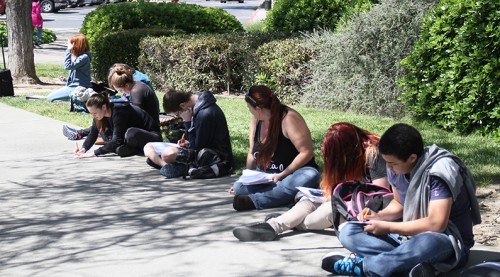 Proffesor Paula Rodriguez-Rutten’s math 103 class takes a test outside due to a fire alarm that went off Tuesday. The alarm was sounded because a steak that was being cooked in a toaster oven in Liberal Arts 152 Staff started smoking. (Photo by Matthew Nobert)

The class was lined up on the ground taking the test as the alarm was going off.

Professors in affected classrooms were notified within 20 minutes that it was safe to return to their classes.