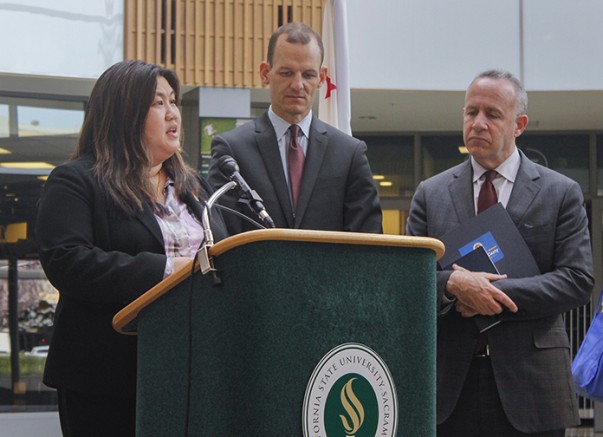 Assembly Bill 2017, a new California bill which would create funding streams for mental health services at public California colleges, was announced by Assemblyman Kevin McCarty at a press conference Thursday.

The bill will be lobbied to lawmakers by American River College’s Life is Worth the Walk Club today, and will be heard by a committee in March before going to the assembly for a vote.

The press conference, which took place at Sacramento State University, gathered representatives from all three major public college systems in the state, including students and faculty from the Los Rios Community College District and ARC.

The first speaker at the conference was former State Senate President Darrell Steinberg, who helped to construct this bill.

“Student mental health is important, and deserves all our admiration and support,” Steinberg said. “The college campus is the perfect place to show that prevention and early intervention works.”

Steinberg, who authored the 2004 Mental Health Services Act, thanked McCarty for choosing to take on the issue of mental health.

Sacramento State President Robert Nelsen spoke not only on how the bill would benefit his students, but all California students.

“I’ve lost seven students to suicide,” Nelsen said. “One in four students need a little bit of help. But California cares about its students, and wants to see them succeed. It is our moral responsibility to be there for our fellow students and human beings.”

“How do we create a culture of wellness on our campuses?” she asked. “65 percent of pur students are from underrepresented communities. Because our students are so diverse, we can intervene in places other systems can’t.”

Lum said that the funding would help the Los Rios Community College district in two ways.

“Our current funding comes from K to 12, but our issues are so much different. This funding stream would let us deal with those issues differently,” Lum said. “It would also allow us to focus on crisis counselling… and to start thinking about new ways of counselling.”

McCarty outlined how the bill would include funding allowing colleges to get a one-to-one match from the government for every dollar spent on mental health services.

Nelsen said that the bill will impact not only his students, but community college students as well, and will have a “tremendous impact on all college campuses.”