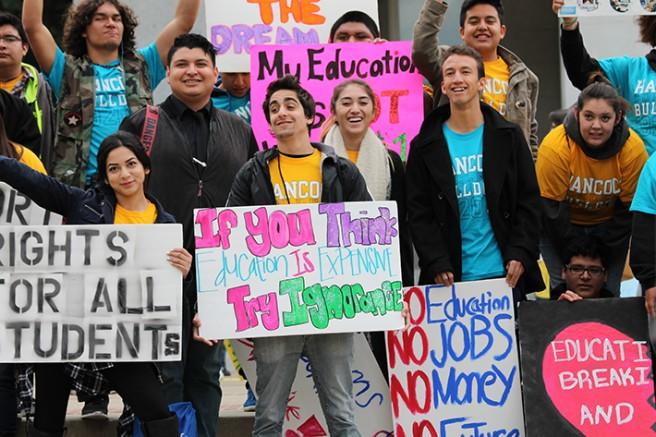 In May 2008, the financial crisis had begun and students from across the state rallied at the Capitol in Sacramento advocating against then Gov. Schwarzenegger’s proposed education cuts.

The Student Senate for California Community Colleges (SSCCC) will not be organizing a March in March event this year, though it is possible an event could be planned in April.

The two issues surrounding the cancellation were availability and funding, according to March in March taskforce chair Gerson Liahut-Sanchez.

The SSCCC doesn’t have enough money to hold the event in March, though Liahut-Sanchez feels that by April there will be more funding.

“I myself do not want to cancel March in March,” said Liahut-Sanchez in a phone interview. “But we were planning a different kind of event.”

Due to budget increases rather than cuts in the past three years and low student attendance, Liahut-Sanchez said a new kind of event needs to happen.

“A lot of the students from the southern region that I represent feel that change is needed, the event is outdated,” said Liahut-Sanchez.

With the event only drawing 100 students last year, the SSCCC feels better organization and a more contemporary event would raise student awareness and participation, according to Liahut-Sanchez.

“I want to plan a good event for my students,” Liahut-Sanchez said.

A letter will be sent out soon updating the constituents of March in March, according to Liahut-Sanchez.

The American River College student senate body was informed by director of communication Tami Dunning at the Feb. 9 meeting that March in March was canceled.

ARC now has limited time to decide where to re-allocate the $12,000 dollar budget set aside for March in March.

“The money the SSCCC budgets for March in March does not go to campuses, nor does the money ARC passed for our campus go to the SSCCC,” Dunning said. “ARC actually did donate $3,000 to the SSCCC this (school) year.”

Justin Nicholson, chair of the March in March Ad-Hoc committee, stressed that the board needed to act quickly in regards to the money it already allocated.

“We need to make a decision like now,” Nicholson said. “Whether or not we are going to do anything for March in March.”

Nicholson suggested that there be some internal event for higher education on campus, while director of finance Jeremy Diefenbacher feels that using their energy on the upcoming elections would be better.

“I think that we should let it go,” said Diefenbacher, student senate director of finance. “I feel like the SSCCC has had an apt amount of time to plan the event. I feel like it’s a waste of energy,”

“I don’t think we need the SSCCC,” said Jones. “I think we can do it without them.”

The SSCCC created the March in March task force to set up the theme, date, and location for the event.

For now, all ARC student senate discussions regarding March in March have been indefinitely postponed.

There is no diversity in dining options on campus