Student Senate rescinds petition for removal of board member 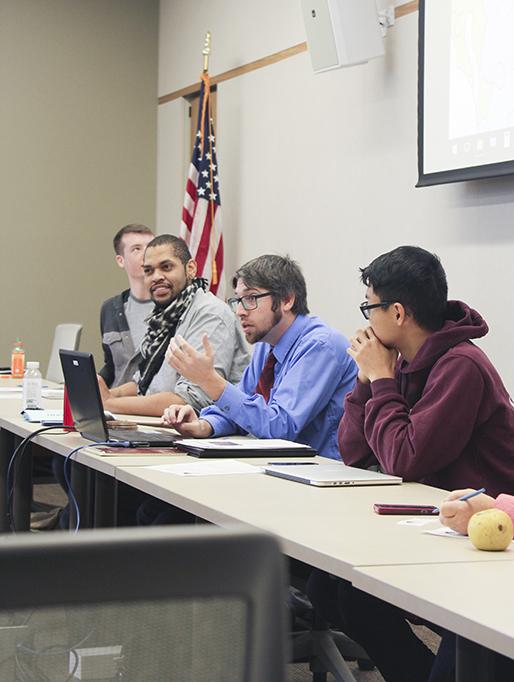 Senate President David Hylton II acknowleges a motion from another board member during Thursday's meeting. (Photo by Robert Hansen)

Student Senate Vice President Valencia Scott rescinded the petition calling for the removal or suspension of Student Senate Director of Communications Tami Dunning hours after the judiciary committee that would make the decision to suspend or remove Dunning was formed at Thursday’s Student Senate meeting.

Student Senate Adviser Juan Blanco said he knows why the petition was rescinded but wouldn’t say and instead referred all questions to Scott.

Scott was reached via e-mail but declined further comment at this time “since the board is now moving past the issue,” Scott said.

Dunning said that if everyone understood the bylaws, constitution, and Brown Act that we would not have as many disagreements and would avoid any similar issues moving forward.

“This board has a lot of passion which is good, we shouldn’t always agree,” said Dunning, “ (But) we need to work together.”

Dunning hopes that other members of the board will communicate with her more to clarify any misunderstandings.

“Not one of them, not one of other board members has come to me, reached out to me,” Dunning said. “So that I can show them that I am only trying to follow procedure and not trying to make meeting less productive.”

A bill has been proposed which allows the Student Senate to allocate up to $300 for training and consulting from Lorenzo Cuesta in parliamentary procedure for the spring semester.

Lorenzo Cuesta is a professional registered parliamentarian accredited for doing work at Sacramento City College, according to Blanco and Dunning.

“What I do is make sure college procedure, regulations, and the CA ed. code is followed,” said Blanco.

Blanco said that they have been trying to get Lorenzo on board for a long time and it is not related to the Dunning incident.

This bill states ASB Student Senate is in urgent need of ongoing consulting in parliamentary procedure to maximize the chances of success and even its existence.

“We should be wary to pass a bill … consulting. That’s the only term we have for what we’re paying someone $300 to do,” said Cortright. “Some additional information would be valuable before we consent action to this bill.”

After Cortright expressed his concern, Hylton II then acknowledged a member of the public and asked him to state his name.

The man identified himself as Daniel O’Neil, then said, as if to exemplify the senate president’s need for professional consultation, “I shouldn’t have to state my name due to Brown Act,” then continued.

Daniel O’Neil is a student tutor at Sac City and has received training from Cuesta while he was vice president of Sac City’s Student Associated Council.

“I think you guys are underestimating the word consulting,” said O’Neil, “He will go above and beyond his responsibilities listed in the bill.”

After the meeting O’Neil said the key is making sure the rules are followed consistently and effectively which is what Lorenzo offers.