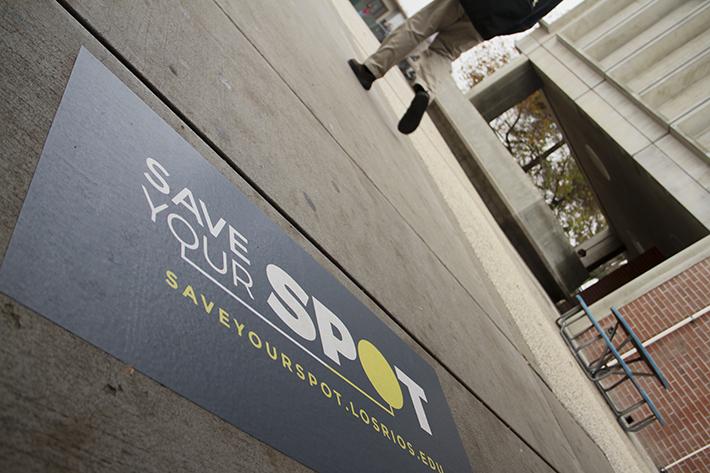 A poster at the southern end of the Liberal Arts breezeway was put on the sidewalk as part of a Los Rios Community College District adversiting campaign seeking to encourage students to sign up for spring classes. (Photo by John Ferrannini)

The Los Rios Community College District has been engaging in an advertising campaign to encourage students to sign up for spring classes.

Posters saying “Save Your Spot” have been posted on doors, walls and sidewalks across the district. The campaign also involves targeted online ads.

Mitchel Benson, a spokesperson for Los Rios, said that the district is using multiple methods to try and increase enrollment numbers.

“The impetus is what we in the community college world call persistence – encouraging students to persist from fall to spring,” Benson said. “We decided to take a different track and acknowledge that it’s more cost effective and more efficient to encourage Los Rios students to persist.”

The online portion of the campaign involves a website and online advertisements using a method Benson called “geo targeting.”

“That works on social media and it’s advantage is that it focuses on I.T. addresses,” Benson said. “At the district office, I’ll see ads for Sac City. From my home in Folsom, I’ll see ads from Folsom Lake.”

Benson said that in addition to high tech advertising, professors have also been encouraged to talk to students about the importance of signing up for classes.

American River College student Abbie Granley said that she thinks the campaign is a good idea, but wishes there was more. She hadn’t seen any of the online advertising.

“I feel there needs to be more on social media, on Twitter. More people our age go to that than actual websites,”Granley said. “It helps to remind you to make an appointment with a counselor. A lot of people procrastinate and I’m a procrastinator – so it helps.”

Added ARC student Patrick Simpson: “I use ad block. The only stuff I’ve seen is here.”

Rick Brewer, a spokesperson for Sacramento City College, said that the decision of where to put the decals was up to the individual colleges.

“I went around with the installer myself and thought of different places to put them – places where we thought we would have high traffic,” Brewer said. “We put some on tables in the Student Center, the library and the City Cafe. … I’ve had no negative feedback and it’s opened up some conversations.”

ARC public information officer Scott Crow did not return a phone call as of press time.