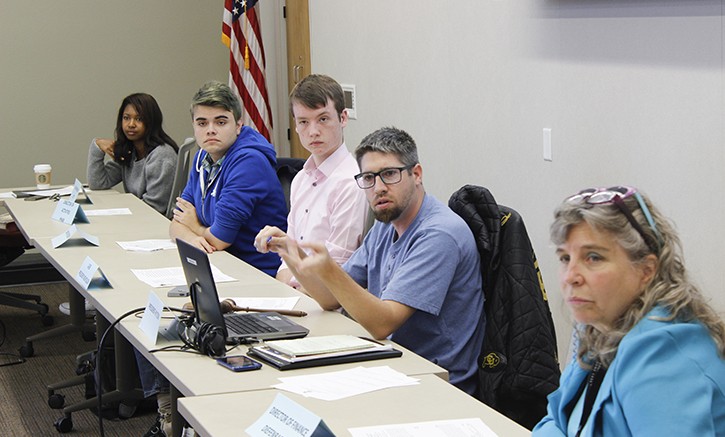 Senate President David Hylton II speaks during Tuesday's Senate meeting. Hylton requested a moment of silence during the meeting to honor the victims of the tragedies in Paris on Nov. 13. (Photo by Jordan Schauberger)

The Associated Student Body Student Senate held a moment of silence during its meeting Tuesday for the victims of the several tragedies, including the terrorist attacks in Paris, that occurred over the past weekend.

President David Hylton II made a point of wanting the moment of silence to be for all the tragedies in the world and not just those in Paris.

“It’s for France and the rest of the world, all the people that are struggling,” Hylton said. “It seems like the only time we take a moment of silence is when something so shocking occurs.”

Sen. Regina Drake announced during the public comment section of the meeting that she will be stepping down from her position since she had to drop a class and, therefore, is no longer enrolled in the required number of units for ASB board members.

“This fall, I came back to school still sore after going into the hospital. I thought (I) could do more, but … I should have made sure I was healed up from my surgeries,” Drake said. “I know it doesn’t matter who you are you can make a difference, all you must have is the determination.”

Drake said that she is planning on returning to Senate next semester.

Sen. Tamara Dunning suggested that the board support the implementation of mandatory office hours for adjunct professors on campus.

“Adjunct office hours are extremely connected to student success,” Dunning said. “We (students) expect to be able to get our education and be able to get help, (and), in order to do that, we need to be very supportive of our adjunct faculty.”

The board created an ad hoc committee, with full authority, to explore Lobby Day topics, as well as tabling ideas for World AIDS Day, which falls on Dec. 1.

The board, in congruence with the Clubs and Events Board, approved a resolution to create a survey to poll students on the need for more accessibility of American Sign Language (ASL) interpreters.

Several board members attended the General Assembly event over the weekend, but decided to hold off on their reports until next week since they didn’t have enough time in this week’s meeting.