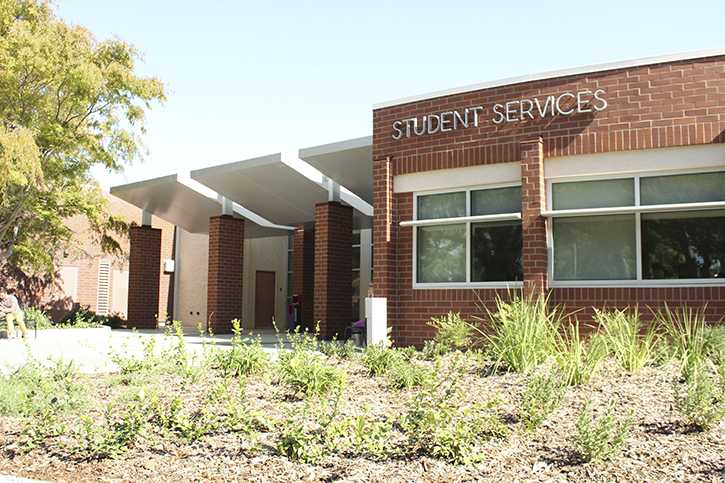 The new wing of the Student Services adds 5,500-square feet to the building. The west side underwent a 14-month remodel from April 2014 to summer 2015. (Photo by Jordan Schauberger)

In the ongoing construction overhaul of the American River College campus, the next project, tearing down and rebuilding the Liberal Arts building, has been announced as the new wing of the Student Services building had its ribbon cut.

According to ARC Public Information Officer Scott Crow, preliminary planning for the Liberal Arts building is set to start in early November, with a move-in time set tentatively for January 2019.

Completely replacing the Liberal Arts building will be by far the largest construction project that induces classroom displacement that the ARC campus has gone through, with previous big projects such as the parking garage, Student Center and the Oak Cafe having little or no effect in regards to temporary classroom displacement.

Director of Operations Dan McKechnie said the amount of classrooms affected is only one of many concerns that result in a project of this magnitude.

“That’s a pretty significant undertaking,” he said. “Having that many classrooms displaced is going to be a challenge.”

According to ARC President Thomas Greene, the Portable Village will be used as temporary housing during the construction, similar to past projects that affected classrooms or service buildings on campus.

“What we do often times is we move the classes to temporary swing space such as portable classes and temporary classrooms. We use any unused spaced on the campus,” Greene said.

The building houses 34 classrooms in total, which makes it difficult to predict how all the temporary re-shuffling will take place.

“I think it’s a little too early to say, but I think it’s part of what needs to be determined,” McKechnie said. “Having a large amount of classrooms affected all at once could very well dictate in part how the construction process takes place.

“Do we tear it down all at once? Do we tear it out in phases? You just don’t know until you get into it and know a little more in depth about the project.”

McKechnie outlined the process for planning and completing construction, involving steps that include selecting an architect, laying out a design plan, construction, review and approval.

A committee comprised of both campus and construction representatives will dictate the building design, according to McKechnie.

After the planning is completed and a design is laid out, actual construction takes about one year.

The completed building will then be reviewed for structural safety, Americans with Disabilities Act (ADA) compliance, fire and life safety before it can be approved.

McKechnie stressed the dates are still very tentative at this point and that many factors could present themselves throughout the process.

“With the caveat of you’re constructing a new building in the center of campus … you don’t know what you’re going to find when you tear it down,” McKechnie said.

The new west wing on Student Services was completed in the summer of 2015, giving California Work Opportunity and Responsibility to Kids (CalWORKS), the Assessment Center and Financial Aid new homes.

The Career Center, still located in the Portable Village, is the only service Student Services offers that has yet to move into its new location.

McKechnie said the delay is caused by dealing with other agencies that don’t allow the school full control.

McKechnie went on to say that while it isn’t critical since the center is still functioning, he doesn’t expect finalization to take long.

“I’d like to say by the end of the calendar year,” McKechnie said.

John Ferrannini contributed to this report