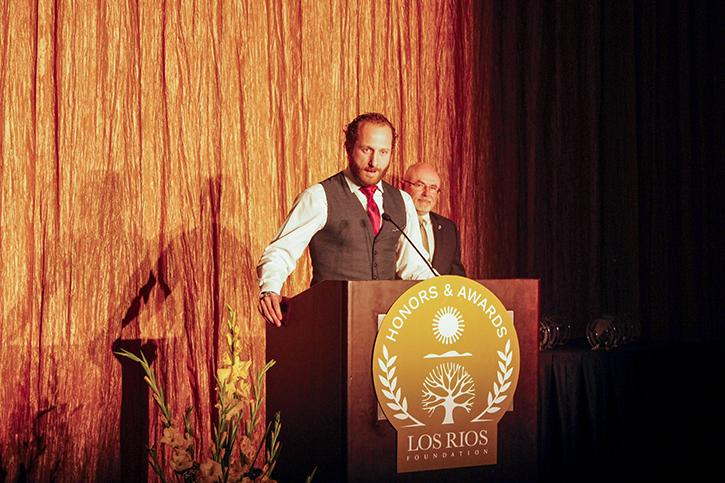 Former Oakland Athletics player and American River College alumnus Dallas Braden speaks to attendees of the Los Rios Foundation Honors and Awards Gala at the Sheraton Grand Hotel in Sacramento on Friday. Braden was one of four alumni honored by the foundation at the gala. (Photo by John Ferrannini)

The Los Rios district was first incorporated in 1965, joining the already existent Sacramento City College with American River College. Friday’s event was put on by the Los Rios Foundation and took place at the Sheraton Grand Hotel in downtown Sacramento.

Each of the colleges chose one alum and one or more donors to honor. The ARC alumnus awarded at the ceremony was Dallas Braden, who pitched a perfect game for the Oakland Athletics on May 9, 2010 and played for them for 4 years.

Braden, who graduated from ARC in 2002, credited his experiences on the school’s baseball team with his success later in life.

“A lot of people consider junior college to be a stepping stone, but for me it was a launching pad to division one baseball and the big leagues,” said Braden. “Men like (head baseball coach) Doug Jumelet taught me accountability, that everything you do in life is like doing an assignment, putting your name on it and handing it to your teacher.”

Los Rios Chancellor Brian King said that each of the individual college foundations took the lead in choosing both the alum and donor honorees.

Kirsten DuBray of the ARC Foundation said that the choice of Braden was a “natural selection” and that she hoped the event helps people to see “the value of Los Rios.”

“For our district alum, they were trying to look at someone who had humble beginnings who was a product of the college and claimed that if it wasn’t for ARC and his coaches he probably wouldn’t have gone on,” said DuBray. “Often times people thank a four year for that, but community colleges provide a point of entry.”

Fred and Molly Evangelisti were the two donors who were awarded at Friday’s ceremony.

The couple, who according to DuBray are the largest donors in the college’s history, provided money for the building of the new Culinary Arts building that opened in January.

“We saw that there was a need for it,” said Fred, who is also an ARC alumnus and professor. “They were in outdated facilities with old equipment and we wanted them to have state of the art lecture rooms and labs.”

Molly, whose great, great-grandfather founded the Sacramento Bee, said that she was taught by her family the importance of giving to the community.

“It’s also a facility that will be educating students after we’re gone, putting many of them into the community to work.”

King reflected upon being the district’s chancellor during the anniversary during a reception before the gala.

“It’s an awesome time for a celebration and it’s amazing to honor the outstanding alums and those who’ve been so supportive of the students,” said King.

It was following supper in the grand ballroom that the awards were given and the honored alumni and donors had the opportunity to speak.

California Chief Justice Tani G. Cantil-Sakauye was honored by her alma mater, SCC, and received the largest applause of the night. She said that her speech and debate adviser, Ken Lynch, helped her on her path toward becoming a lawyer.

“I learned at SCC to find my voice, and when you’re the youngest of an Asian family and you’re a girl, it’s a mighty thing,” said Cantil-Sakauye. “When I found out I could speak for 10 minutes uninterrupted  – that’s a calling.”

The donor honored by SCC, Carol Spurgeon, is the mother of ARC English professor Michael Spurgeon.

The elder Spurgeon said she set up a scholarship at SCC as a way to honor her parents, who attended the college in the 1930s.

Although not one of the honorees, ARC nursing student Vita Kotyay spoke to thank Los Rios Foundation members for scholarships she has received.

Concurrently taking classes at ARC and Sacramento State University, Katya said that the money has given her the opportunity to witness an open heart surgery.

“What a great honor it is for me to have my life interact with people who are not statistics, but whole stories,” she said.

The other alumni honored at at the gala were Cosumnes River College alumnus Scott Syphax, the CEO of The Nehemiah Companies, a real estate development firm, and Folsom Lake College alumnus Ryan Wood, a partner with the Stoel Rives law firm and a veteran of the Iraq War.

The other donors honored were Merrilee Engel, the former president of Cosumnes River College, and Sevy and Neva Cimaroli, who contributed the money to Folsom Lake College that allowed the school to build a theater arts center.

Brian Morris accepted the award on behalf of the Cimaroli’s, who died in 2009 and 2014, respectively. He noted that his aunt wanted her name off of a plaque on the ticket office dedicated to her on the school theater building.

“Our aunt didn’t want to be recognized for what she was doing. She did it for the community, to make it better,” said Morris. “She tried several times for people to take that sign down. She didn’t want her name on the Folsom Mercy Hospital either, but hopefully she’s looking down and enjoying it.”

The gala dinner and awards ceremony ended with an announcement that there will be another event at the Sheraton Grand on April 22, 2017 celebrating the centennial of the founding of SCC.