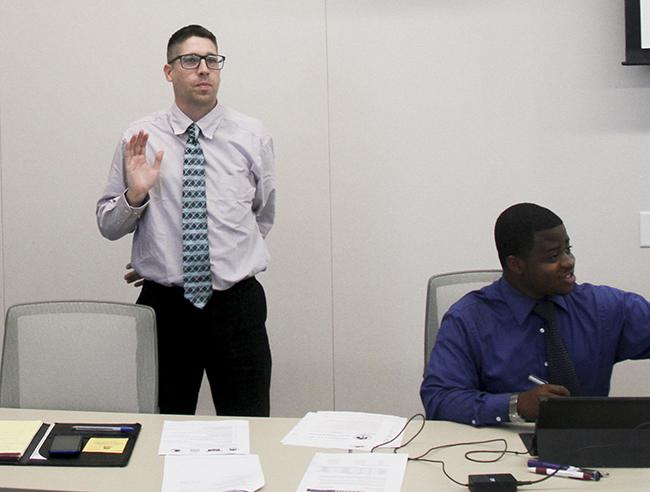 During a 38-minute interview with the Current on Friday, acting Student Senate President David Hylton defended Student Trustee Cameron Weaver’s skepticism about the Holocaust and spoke at length about the conflict between Israel and Palestine, saying that Israel is “killing innocents.”

Hylton also questioned how, since the “Jewish community went through the Holocaust,” they could “conduct the same type of thing on other people (the Palestinians).”
The Current: Do you understand where people are coming from when they say they want to see (Cameron Weaver) recalled?

David Hylton: “Yeah, and until we get a significant number of people coming and asking about that then—And let’s talk about Israel and Palestine if you want to talk about the Jewish community.”

The Current: What about them?

Hylton: “You don’t know anything about Israel and Palestine?”

The Current: I want to know why you want to talk about it.

Hylton: “I’d like to talk about it because there’s human rights violations going on and the Palestinian people don’t have a say in the United Nations. They don’t have statehoodship (sic). And they’re getting murdered. By Israel.”

The Current: How does that relate to—

Hylton: “Well, because, you know, throughout life you’re supposed to learn from history, and since the Jewish community went through the Holocaust you’d assume that they wouldn’t conduct that same type of thing on other people. I’m not saying that they’re using gas chambers or anything like that on the Palestinians but up until last year they were out there blowing up their houses like that and killing innocents on a crusade to take away the Hezbollah’s weapons.”
(Story continues below)

In response to these comments, Bruce Pomer of the Jewish Community Relations Counsel said he “could not be more disturbed.”

“It’s almost like he (Hylton) is using what’s going on in Israel to justify the Holocaust,” said Pomer. “It’s very offensive to everyone who was affected by what Hitler did. If I was a Jewish student there, I’d feel uncomfortable.”

“Yeah, I think it’s okay to question everything because once you stop questioning things—I heard the other day that this is starting to become a ‘holy cow,’ we can’t talk about the Holocaust because now we’re going to get persecuted and thrown up on a cross for talking about the Holocaust,” said Hylton.

Hylton also said that he questions the amount of casualties reported.

“I would question the amount that we are reporting because we all know that it wasn’t just the Jewish community in those concentration camps so was it 6 million people died or 6 million Jews? Because that’s a big difference when you have the LGBT community, you have people with mental disorders, you have gypsies. Those are a lot of people who are also included in that number,” he said.

Hylton, who was censured by the Senate in April after admitting to a drug offense committed while at the state General Assembly for the Student Senate for California Community Colleges in Los Angeles, went on to state that he agrees with Weaver’s opinions regarding school shootings and antidepressants.

“I actually do agree with him on that,” said Hylton. “I think yes, there should be sensible gun laws, like keeping mentally challenged people from getting weapons but also we need to look at the usage of antidepressants, are they cause for this because we want to blame it on guns and not that we’re not counseling people correctly or we’re not doing other things. We’re just medicating them.”

Hylton, who was recently appointed acting president of the Student Senate following former president Garrett Kegel and former vice president Sam Kinsey’s abrupt resignations, refuted that there needs to be a special election, saying that according to the ASB Constitution the criteria that call for a special election haven’t been met.

“Special elections may be called when necessary, special elections may be held for A. changes in the constitution, which isn’t what’s going on, the creation of a new elective office under the Associated Student Body, which isn’t happening, or C. after an election all elected offices of the student senate or clubs and event board remain vacant, after the election, the only office that was vacant was the office that I came into, which was Director of Finance,” said Hylton.

However, according to Article 13, Section 3 of the ASB Constitution, a vacant position on either ASB board may be filled via a special election if the position was vacated in one of eight ways, one of which is resignation.

Hylton believes that the special election that was held when former president Jorge Riley took over the position two years ago should have never happened.

“And that’s what I would say, that special election was unconstitutional since it, since it didn’t have all elected office were vacant,” he said.

Hylton, who was appointed to the Student Senate as director of finance after losing the spring election for the presidency to Garrett Kegel, said he doesn’t believe that students should have the chance to vote for a new president during a special election.

Hylton continued to say that Cameron Weaver is a friend of his, and that he will not put the recall issue on the agenda until students fill out an agenda request.

“He’s a friend of mine but besides that I don’t have a loyalty to nobody but our students,” said Hylton. “But again if students don’t use their voice … Honestly, we have issues that actually directly affect them, like personally affect them, that I’d rather bring to them. If they want to come to talk to me and set up and ask us to create this forum, then yes. And I’m not going to do it with one person that has a outcry. I’d like to see more than one person out of our 30,000 students, you know, and you put him through the ringer for one student.”

When asked if the statements made by Cameron Weaver are a big issue to him, Hylton replied: “Honestly, no.”