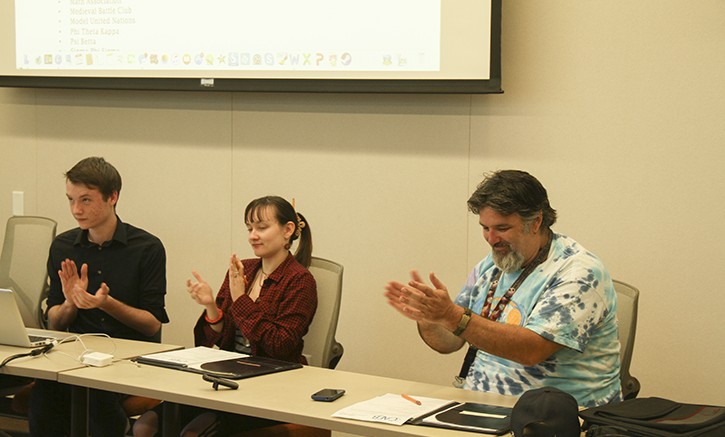 The Clubs and Events Board (CAEB) discussed the success and failures of last week’s Club Day and planned next month’s Club day for most of its meeting Tuesday.

CAEB President Justin Nicholson commended all of the clubs for their participation and noted that this year they seemed more involved.

“You all did a fabulous job,” said Nicholson. “Much better than previous Club Days that fell flat.”

“I thought it (Club Day) was amazing,” said Jones. “In the future, we need more help from Senate.”

The “create a game” competition was a hit with Math Club’s jeopardy-styled game winning.

The board also highlighted Fierce’s game as refreshing.

“I really thought the game Fierce made was great and very educational on (LGBTA) terms,” said Jones. “It’s something we could save and maybe put up in the Equity Center.”

Looking to next month, the board discussed a proposed “harvest festival” themed Club Day.

Some of the ideas that were thrown around included a costume contest, haunted house and a “fact or fiction” game for local urban legends.

Jones also suggested the idea of a game about the “horrors” of current politics but it was quickly shut down by President Nicholson.

“We will not take a stance that might possibly ostracize a group of students,” said Nicholson. “CAEB is not the proper medium for that.”

Nicholson later added that CAEB supporting the Measure A bill was different than taking a stance on outside politics.

“We want to take a stance on issues that directly affect this campus,” said Nicholson. “If it’s outside of our campus we want to remind our involvement in.”

Fashion Club announced that they will be having a sewing day next Monday at 3:30 p.m. in the Arts and Science building room 105.

“We’re going to be up cycling shirts,” said Fashion Club President Jaimie Braaten. “You can come to update your shirt to something more fun and personal.”

Improv Club said that around 50 people attended their late night improv session last Thursday and invited everyone to the next event on the Oct. 29.