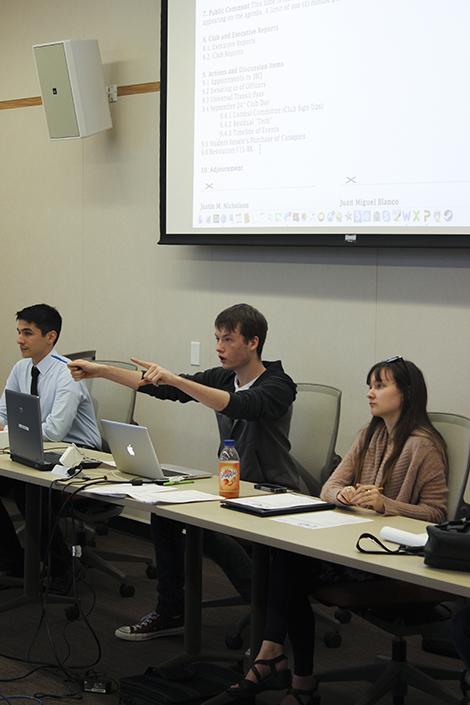 The Clubs and Events Board spent much of its Tuesday meeting preparing for Thursday’s first club day of the semester.

In a busy day for the Associated Student Body (ASB), the Clubs and Events Board (CAEB) meeting followed directly after Student Senate on Tuesday.

“Good luck everyone,” said CAEB President Justin Nicholson. “Club’s Day is in just two days and I’m sure it’s going to be a lot of fun.”

The “Let the games begin” club day will start at 10 a.m. and will consist of live music, life-sized games like tetris and pacman and a club “board game” competition. The events end at 1 p.m.

“We’re working on getting canopies for CAEB,” said Student Senate President Garrett Kegel. “Once we get an exact figure we’ll move forward. It looks like we’ll be able to purchase around eight.”

Sergeant Mike Olson of the Los Rios Police Department came to the meeting to reiterate what he said in last week’s Student Senate meeting about safety concerns.

“We’re always available to talk,” said Sgt. Olson. “Whether you need to schedule a time to talk to us or you want us to talk during a meeting like this one, we’re here.”

Several clubs, including the Puente Club, which was attending the meeting for the first time this year, had updates on activities that were coming up in the next few weeks.

The Fashion Club will be meeting in the Art and Science building room 105 every Monday at 3:30 p.m.

Math Club will be meeting in the Student Center by the eServices Center every Monday at 11 a.m. there will be pizza.

On the last Thursday of every month, Improv Club will be hosting a late night improv session from 10 p.m. to midnight; this month’s theme will be “punk goes comedy.”