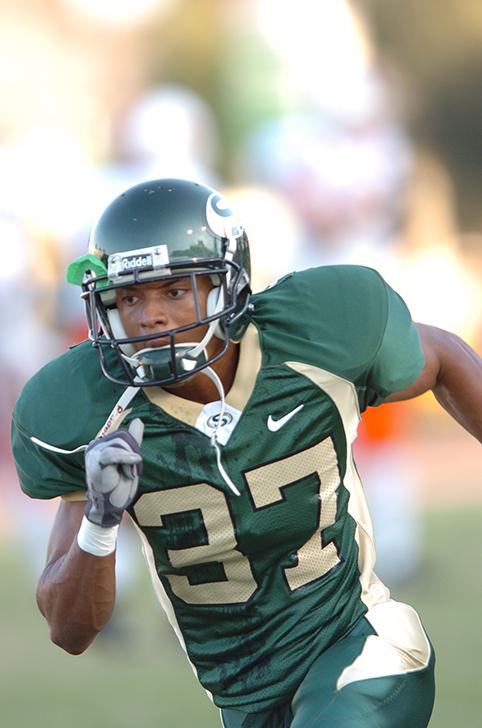 Carlos Francies, a sheriff's deputy with the Contra Costa Sheriff's Department, drowned in Lake Tahoe Aug. 13 while attempting to save a friend who he thought was drowning. Francies played football for American River College, participated in track and field and went on to play football for Sacramento State. (Photo courtesy of Sacramento State Athletics)

A Contra Costa deputy and former American River College student athlete drowned on Aug. 13 in Lake Tahoe while attempting to rescue his friend who he thought was drowning.

Carlos Francies, 30, was enjoying a day off from his job at the Contra Costa County Sheriff’s Department, where he worked as a deputy. Francies, his girlfriend, sister Kayla Richardson, and male friend rented paddleboards and kayaks to have a day out on the lake.

Due to the high winds and choppy water, Richardson fell into the lake while standing on her kayak and the male friend jumped in after her and got her back into her kayak.

According to the South Lake Tahoe Police Department, Francies, who was further away from the two, thought that the male friend was in distress because he was struggling to reach his kayak while holding a paddle.

Francies jumped into the water, without a life vest, after his friend, but began to struggle.

Francies was rescued by his girlfriend, a registered nurse, who performed CPR until first responders arrived. He was taken to Barton Memorial Hospital, where he was pronounced dead.

The Contra Costa deputy began his college career at ARC in 2002 where he played football and participated in the 400-meter dash in track and field.

When Track and Field coach Rick Anderson heard the news about Francies, whom he had coached in 2004, he was devastated.

“He was a super nice kid who gave 100 percent in track,” said Anderson. “He wasn’t the most talented but he tried his hardest.”

Anderson remembers Francies as being quiet but well-spoken and liked among his peers.

“It was a surprise to hear he went on to become a sheriff’s deputy, seeing as he was so quiet,” said Anderson.

However, professor and former head football coach Don Dillon said the news of Francies joining the police force wasn’t the least bit surprising to him.

“He was a wonderful young man,” said Dillon who coached Francies during his time on the field as a part of the secondary defense.

Dillon remembered Francies as an engaged and caring student.

“He always put the team first, never himself,” said Dillon.

Due to Francies caring nature, Dillon said he was not surprised to hear that the deputy went to the aid of another person even if it put his life in danger.

“It makes you feel good when students go on to make a significant impact in the community,” said Dillon. “It breaks your heart when you lose them.”

The funeral service for Francies was held Aug. 30 in Sacramento, California.