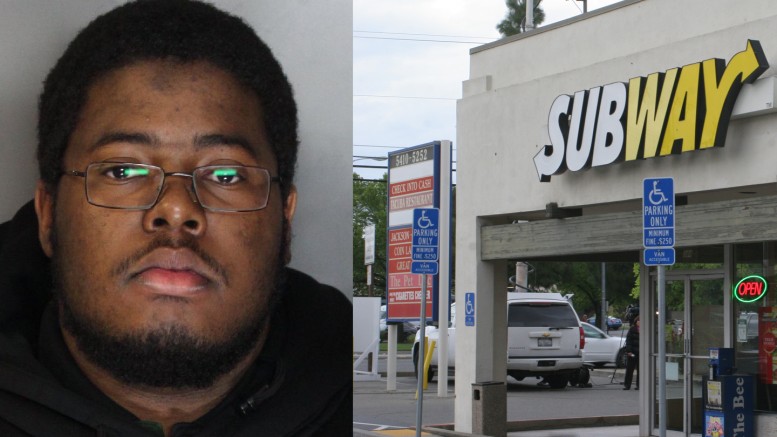 Kenneth Chandler Anderson, 24, was found guilty of five counts of forcible sexual penetration by a foreign object, and one count of unlawfully attempting to dissuade the victim from reporting the crime to law enforcement in Sacramento Superior Court on Aug. 14. (Mugshot courtesy of Sacramento County Sheriff's Department)

A Subway employee and former American River College student accused of sexually assaulting his co-worker and preventing her from calling police was found guilty by jurors in Sacramento Superior Court on August 14.

Kenneth Chandler Anderson, 24, now faces up to 125 years in prison after being convicted on five counts of forcible sexual penetration by a foreign object, and one count of unlawfully attempting to dissuade the victim from reporting the crime to law enforcement, according to the Sacramento County District Attorney’s Office.

According to the District Attorney’s Office, “On March 25, 2014, Anderson entered a Subway restaurant approximately one hour before the victim was scheduled to open the business. He reset the alarm so the victim would not know he was inside when she arrived at approximately 6:30 a.m.  Anderson struck the victim in the head, duct taped her mouth, and covered her face with a shirt. He then proceeded to sexually assault the victim.”

“Based on the incredible bravery of the victim, and the excellent investigative work of the Sacramento County Sheriff’s Department, Anderson will now be held accountable for his heinous crimes,” Deputy District Attorney Laura West said in a press release.

As previously reported by the Current, Anderson blogged about the attack on his Tumblr page before his arrest, and made reference to having to clean up the bloody crime scene.

“Theres (sic) blood literally all over the store from it, I even had to clean some up that the cleaning crew missed,” read a post dated the day before his arrest.

In another post, he wrote about a conversation he had with a 16-year-old co-worker in which he asked her what sorts of weapons and defense training she had in case anyone tried to attack her. He notes that he inquired if she carried pepper spray or had martial arts training.

It is unclear if the co-worker Anderson wrote about is the victim.

After graduating from nearby Mira Loma High School, Anderson enrolled at ARC in 2009, where he studied psychology until 2011.

The Equifax data breach may have put your identity at risk