Update April 27, 2015, 8:59 p.m.: The name of the main suspect is Jeremiah Hankins, 35. Hankins has been booked on five felony charges including attempted murder, according to a press release by Sgt. Lisa Bowman, the spokesperson for the Sacramento Sheriff’s Department. 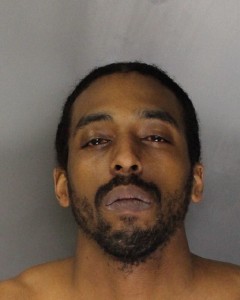 Courtesy of the Sacramento County Sheriff’s Department. Jeremiah Hankins, 35, has been arrested and is being charged with five felonies, including attempted murder.

A Carmichael man was taken into custody today after a five-hour standoff with Sacramento County Sheriff deputies and SWAT teams outside of his Madison Avenue duplex near Schuyler Drive, less than two miles from American River College.

Jeremiah Hankins, 35, allegedly shot a woman in the neck around 10 a.m., and shot multiple times at police forces during the standoff.

According to Chris Hoff, a neighbor to the shooter, the woman shot was the shooter’s wife or girlfriend, who lived with him at the duplex.

She was running away from him, covered in blood and screaming, when Hoff first went outside.

Another neighbor of Hoff’s was also targeted, but not hit, according to Hoff.

“As I was running out the front door, the girl was running down the street and bullets were flying towards my neighbor,” said Hoff.

“He hopped out of his car and booked it, screaming ‘get inside, get the baby, close the door.’”

Hoff then said that a postal worker attempted to help move the woman out of firing range, and that police arrived nearly a minute and a half after the first shots were fired.

Then, according to Hoff, the woman, who was bleeding badly, was moved across the street into a store’s parking lot. Police attempted to revive her, but eventually stopped and waited for an ambulance.

She was taken to a nearby hospital, and according to multiple news outlets, she is in critical condition.

Hoff, who has lived on the street for over a year, said that the couple, who lived two doors down from him, were very reclusive, and often only interacted with their neighbors to tell them not to park in front of their duplex.

“He’d come out and say something to you, like ‘Don’t park in front of my house or I’ll put a bullet in you,’ crazy shit like that,” said Hoff.

Hoff’s landlord, Tom Pool, said that when he did park in front of the duplex, he was met by the alleged shooter, who was wearing a hooded sweatshirt, large sunglasses and a dust mask.

“He was holding something in his pockets,” said Pool. “I felt like it was a gun.”

Pool said that the shooter then said someone had been looking through his window holding a gun, and that his paranoia had forced him to return to “popping pills.”

For Hoff, a former ARC student of from 1999 to 2004, the sound of bullets alerted him even more, because he survived being shot in the face three years ago.

The bullet, fired at him during a mugging, entered his face near his nose, went through his brain and lodged itself in the back of his skull, where it remains now.

“I’m lucky to be alive,” said Hoff, who also remarked he felt lucky to avoid getting shot a second time while running out of his house.

According to a press release by Sgt. Lisa Bowman, the spokesperson for the Sacramento Sheriff’s Department, Hankins has been booked at the Sacramento County Main Jail on five felony charges including attempted murder.

Photo by Kameron Schmid. The man, who according to neighbors, was very reclusive, allegedly shot his wife or girlfriend, whom he lived with in a duplex on Madison Avenue off of Schuyler Drive.

A collaborative meeting for Student Senate and CAEB

1 Comment on "Carmichael man arrested after shooting and police standoff"