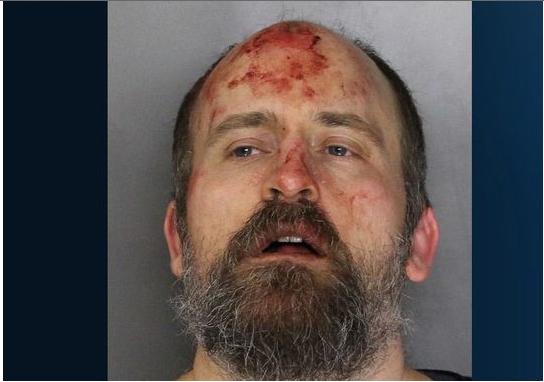 Travis Lanning's mugshot after his arrest Monday morning. His first court appearance is scheduled for Wednesday, and he faces a felony charge of assault with a deadly weapon.

A former American River College student who brutally attacked a woman and her dog with a medieval morningstar-styled mace in the early hours of March 23 is now being charged with attempted murder, but has yet to appear in court due to “psychotic episodes.”

Travis Lanning has missed all four of his scheduled court dates, as court officials said he is unsafe to transfer in his current medical condition.

Lanning is being charged with attempted murder, but was first arrested on charges of assault with a deadly weapon. He is ineligible for bail.

According to reports, Lanning attacked a woman walking her dog in the very early morning on March 23, sending her to the hospital in critical condition and the dog to a veterinarian hospital as well.

And as the media upswell began to rise, things were abruptly halted as Lanning’s mental state was brought to attention. Lanning’s public defender declined to comment after appearing in the courtroom on his second scheduled appearance date.

The story of the attack was a topic of both national and international conversation as articles about the abnormal weapon choice and gruesome mugshot taken after the arrest appeared online in local Sacramento news outlets, and soon spread to outlets based in New York, Los Angeles and London.

Lanning, 34, posted images of the mace on his public Facebook profile two weeks prior to the attack.

“I’d just walk around with it all day everyday if I could,” Lanning posted with one of the photos. He also called the weapon “unmerciful and vicious.”

Posts on the public account also pointed to Lanning apparently leaving ARC in 2014, calling it “bullshit.” Lanning says in the same post that he first started attending ARC as a 17-year-old. Other posts alluded to membership to Phi Theta Kappa, and obtaining a degree from ARC in computer sciences.

Scott Crow, ARC’s public information officer, confirmed that Lanning is a former student who had a listed major in Computer Information Sciences, and is no longer enrolled.

No Phi Betta Kappa members that were contacted remembered Lanning, and club president Xavi Aquino said that many people sign up without ever attending a meeting.

Lanning’s last posts on his Facebook all seemed to be centered around death and dying.

On March 20, he posted a link to a reading of a letter written by Sullivan Ballou, a lawyer and politician for the Union during the American Civil War. Ballou was writing to his wife with the belief that he would die shortly thereafter.

Two days prior to that, he posted a status wondering what would happen to a user’s account if they died.

“How do you lock Facebook up for good like if you had died, and just wanna lock it in to be never touched again, without their Admins changing anything? They don’t offer that..,” the post read.

And on March 10, Lanning posted half a dozen photos of himself with what is likely the morningstar-styled mace that he attacked his victim and her dog with. He is smiling in most of the photos.

Photos from News 10’s reports show that the head of the mace had become detached from the handle, possibly from the severity of the attack.

Going farther back, it appears Lanning’s mother died on February 11. Lanning refers to her as the “only person that was always there for me” in his post memorializing her, along with which he posted many photos of her.

Be the first to comment on "Mace attacker awaits court date"