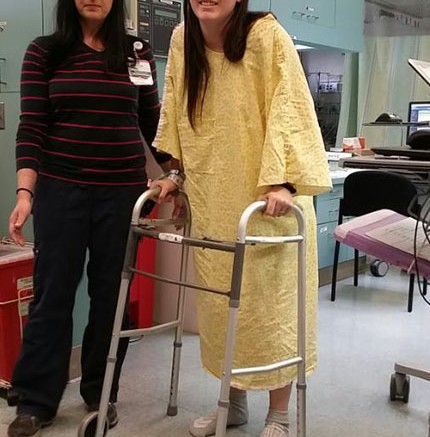 An earlier version of this story falsely reported that Ashlyn Jackson said she was shot with a shotgun. In fact, she believes it was a 9mm handgun.

Ashlyn Jackson was scared to walk again for the first time after she was shot in the legs on the night of April 5.

“I was really scared, probably because I’ve seen too many movies,” said Jackson. “What if my legs aren’t strong enough that I can actually do it? And then I had it in my head that like my legs were going to squirt blood everywhere like when you see a movie.”

Jackson, who took a class at American River College this semester, said she was shot by a motorist while she was in the passenger’s seat of her boyfriends’ car on Interstate 80 while they were going home from a Sacramento Kings game.

“We got on the freeway and what made me notice this guy was that he came up behind me really fast,” said Jackson’s boyfriend, Randy Hurst. “He slammed on his breaks to avoid hitting me so I got over and he got over and he kept on following me and staying right on me.”

Added Hurst: “I rolled my window down to hear what he was saying … he was just calling me like a b**** and a f***** and was saying he was gonna beat my ass if we pulled over.”

Hurst said he changed lanes to get away from the motorist, who Jackson describes as an Asian male in his late 20s driving a silver Nissan Altima.

“When I heard the guy yelling at us I figured typically, if people do get mad, they yell at the person, they flip them off, and then they drive like a bat out of hell,” said Jackson. “Unfortunately, that’s not how it turned out.”

The motorist changed lanes with Hurst, and that’s when the couple said he took out what looked like a 9mm handgun and shot four bullets in the bottom passenger’s side door, two of which entered Jackson’s legs.

“It’s weird when I think back. It feels like it happened in slow motion,” said Jackson. “It felt like somebody had lit my legs on fire. And then I looked down and I realized there was blood everywhere. And I could smell the gunpowder … all of that happened in like a two second period, but it felt like it was forever.”

Hurst and Jackson were accompanied in the car by Hurst’s mother and brother.

“It would have been a mess if somebody else was hurt,” said Jackson. “It was pretty traumatic on all four of us who were in the car.”

Hurst said he wanted to get the motorist’s license plate number.

“I tried to catch up just to where I could see the license plate, but it was like a steady space between me and him and I couldn’t gain any on him,” said Hurst.

Hurst said he then drove onto Auburn boulevard from the interstate. Shortly thereafter, Jackson was admitted to Mercy San Juan Medical Center.

“They checked my whole body to make sure I wasn’t hit somewhere else that I just couldn’t feel,” said Jackson. “Then they started giving me medicine, antibiotics, and I was very lucky, they said I was very lucky that it only went through muscle it didn’t hit any serious arteries or veins or bone.”

Jackson was able to walk with the assistance of a walker two days after the shooting.

“I was in this emergency overflow room that had a desk in the middle so I could do like laps and things,” said Jackson. “It was painful but I was okay and I could walk and I was very happy about that.”

Jackson said that even though she was interviewed by the police in the immediate aftermath of the shooting and reached out to several news stations, neither the police or the media have gotten back to her as of press time.

Jackson is now walking without a walker, although she still has a bullet in her left leg.

She said she is sharing her story to warn others.

“He (the shooter) doesn’t know if he killed somebody or what kind of outlook he’s created for the person he did that to,” said Jackson. “He just carelessly shot somebodys car and drove away without blinking an eye.”