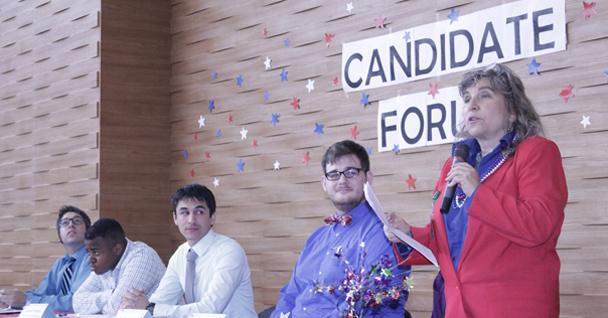 An Associated Student Body candidate forum was held in the Student Center Tuesday. Candidates for student government presented their vision for creating a better environment for students on campus.

Each of the six candidates at the forum had a difference in how policies could change the campus.

The questions for the candidates focused on fees for science students, investment in campus issues, promotion of voting and discussion on a centralized place for club advisors and information.

Candidates answered in accordance with their beliefs.

According to Rodgers, fees that have to be paid should be “accessible (with) priority registration.”

Weaver said that if he was elected Student Trustee, he would focus on the issue.

Garrett Kegel announced that the “value of ARC safety” is a key part of his platform.

“If I am elected Student Senate President, I will make sure we have a Brave Space like we had before,” said Kegel.

Kegel says he wants to use the Brave Space to encourage students to be more aware of the sexual assaults that are reported on campus.

“There should not be any sexual assaults at all and if we had that last semester we need to address that,” said Kegel.

Kegel also expressed that he wants to see more students involved in the election process.

Added Kegel: “We can’t force (students) but we can at least promote awareness.”

Considering the recent news about the Amtgard Club not having a club adviser, David Hylton said he wanted to make a central place for students to access clubs and advisers.

“(I) make it available with a sheet to find clubs,” said Hylton.

Sen. Samuel Kinsey, the candidate for ASB Student Senate Vice President, said that his platform focused specifically on awareness and focusing on the lethargic issues for involving science students.

“I noticed a lack of awareness for students,” said Kinsey. “To me science is the future of our world.”

Kinsey’s plan was to allow the bookstore to provide for students by giving back through an exchange of money, in addition to addressing the fees that students pay.

“The fee is the big step in addressing the issues we have,” said Kinsey. “We have students that can’t join due to money and impactability (but) the bookstore (can) provide some of their profits.”

Kinsey commented on a process that was similar to Kegel’s plan.

“I would address the financial departments or trustees to see where that money goes,” said Kinsey.

Kegel’s idea was working the financial fees through the California Board of Governors waiver to offset student costs.

Kinsey believed that he had the best connections to help promote ARC campus.

“I know so many community member leaders,” said Kinsey. “They know how to make campuses bright (and) give opportunities. I now work for News 10 so events that we have will get spotlight through me.”

Kinsey’s policy for promotion is similar to the ideals presented by Laurie Jones, who is running for Los Rios Student Trustee.

“We have to illustrate graduates that we can advertize,” said Jones

Added Jones: “We need to be more vocal.”

Justin Nicholson, who is running for ASB Clubs and Events Board President, was not present at Tuesday’s forum.

McKaela Broitman, who is running for a position as a senator on the Student Senate, was not present at Tuesday’s forum.