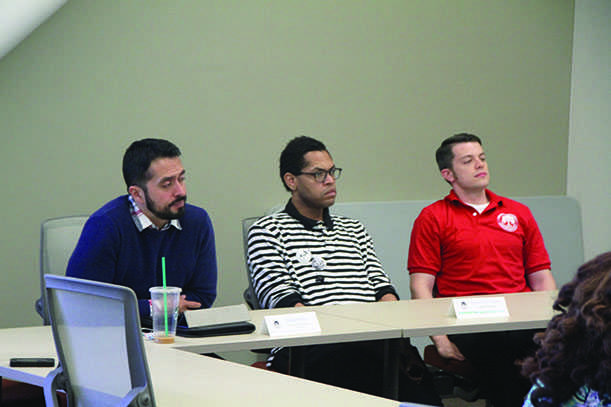 The Associated Student Body Student Senate voted Thursday without opposition to censure Jeremy Diefenbacher, president of the ASB Clubs and Events Board.

Diefenbacher was censured after being sent home from the General Assembly of the Student Senate for California Community Colleges last November after what ASB Student Senate Director of Public Relations Cameron Weaver called an incident “regarding substances.”

Also censured was David Hylton, who resigned last week as Senate director of activities, and who was also sent home from General Assembly for a marijuana-related incident.

“I feel that the board needs to address what happened at General Assembly,” said Kegel. “From what I know, both members violated number ten of the student travel standards of conduct which is ‘the use or possession of drugs or alcohol is not prohibited under any circumstance.’”

A censure is a parliamentary procedure whereby a legislative body decides to “reprimand (a) member with the hopes of reforming him or her so that he or she won’t behave in the same way again,” according to Robert’s Rules of Order.

Nevertheless, Student Senate was unrestrained in its praise for Diefenbacher.

“I’d like to remind the board of Diefenbacher’s outstanding dedication to the student body he is sworn to serve. His leadership has seen CAEB through the good days and the bad days,” said Kegel.

“He’s a very, very charismatic individual and he has an extreme, extreme amount of passion for the students here on campus,” said Cameron Weaver, Senate director of public relations.

“He likes to speak up for groups that might be disenfranchised even in 2015. I hope he chooses to remain to be here until whenever he may feel fit to leave.”

“I want to thank President Diefenbacher, Jeremy, who we love so dearly. It’s one thing what we’ve read in the papers about what he’s been accused of and it’s another thing what I have seen,” said Senate vice president Leslie Milan Fisher.

Weaver was questioned as to the positive tone expressed by the senators during the censure.

“The way I look at the whole college experience, this censure and him getting kicked out of General Assembly is a learning experience,” said Weaver. “In the real world, this stuff cannot fly.”

When asked why he voted for the censure, Sen. Jose Garcia said it was because Diefenbacher and Hylton had done so much for ASB.

“Same reason as people were giving,” he said. “They do put in a lot of work so what they have done might not have been appropriate or right to do, but as far as the work they put in for ASB I think they do a lot.”

When it was clarified what censuring was he said “I thought I did. I guess I did not.”

Hylton was smirking and laughing during the proceedings. When asked about this behavior, he said that he doesn’t know why he reacted in this way.

“I don’t know,” said Hylton. “I’ve never been part of a censure before. I didn’t even know what a censure was.”

Tamara Dunning, who is acting as ASB Student Senate president, didn’t say how she would have voted if she had been called upon for the tie-breaking vote.

“I’m glad senate was able to express their ideas and I’m glad we can move on,” said Dunning.

Hylton confessed to and apologized for the wrongdoing and says he paid back the student money spent on him at General Assembly.

Diefenbacher said he also paid back the student money, but showed less contrition when asked about his actions after a CAEB meeting Friday.

“I’m sorry for my actions but I do think they were blown out of proportion,” he said. “I feel like certain members of the local media vilified me as a public official due to a mistake.”

When asked which local media vilified him, Diefenbacher specified it was the Current.

Diefenbacher had no comment as to whether he had used drugs or alcohol.

Diefenbacher had no comment when asked what was untrue about media reports on him.

Diefenbacher had no comment when asked how many, if any, drinks he consumed the night of General Assembly.

Diefenbacher had no comment as to what, if any, drinks he had consumed.

“If I may assert, we are having an open and inclusive meeting and your questions for Jeremy are becoming a little exclusive,” said Justin Nicholson, a member of Fierce. “I’m not saying you’re not allowed.”

“Would you like a chair?” offered Diefenbacher to the reporter.

Diefenbacher has said that he is not stepping down from his position as ASB CAEB president.

LeslieAnn Dameron, the director of activities for the Clubs and Events Board, defended Diefenbacher.

“People apologize in different ways,” she said. “That’s all I have to say.”

Joseph Daniels contributed to this report.