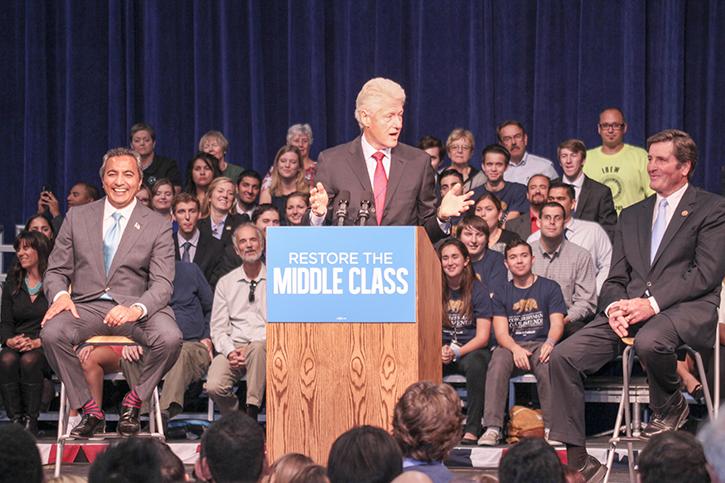 Thousands of cheering students and Democrats heard former U.S. President Bill Clinton speak at a campaign rally at the University of California at Davis Wednesday as legislators up for re-election answered questions from the Current about community colleges.

Clinton was campaigning for congressmen Ami Bera, D-Elk Grove, and John Garamendi, D-Walnut Grove, who are up for re-election on Tuesday, Nov. 4.

Clinton criticized what he termed as “polarization” in government and encouraged the attendees to vote for Bera and Garamendi.

“This new politics of intense polarization funded by outside money and designed to make you think that everybody in public life is some sort of a slug is nonsense,” said Clinton. “It has a very particular purpose in this election, and that purpose is to get you to sit it out – to get you to voluntarily give up your power. You vote, they (Bera and Garamendi) win. You don’t, they don’t. Simple as that.”

Garamendi spoke of the importance of having a former U.S. President come out to campaign for him.

“For everyone on the Democratic ticket, Bill Clinton is our leader,” Garamendi said to reporters. “And Obama isn’t here in California. Clinton is. So we’re delighted, absolutely delighted.”

Garamendi was asked by the Current if he had any plans to help community colleges if re-elected.

“Oh yeah, absolutely. Among them – what are we going to do about the cost of education for students? Student loans are now available for community college students and interest rates are extraordinarily high,” said Garamendi. “So my personal thing is we ought to refinance the student loans just like we refinance houses. Get those loan rates down, get those interest rates down.”

“We also have a new bill on employment preparation and employment training. Community colleges play a major role in that. That one was just signed by Obama about a month ago, a month and a half ago,” Garamendi added.

In April, President Obama announced $600 million in grant programs intended to bridge the gap between a community college education and private sector employment.

During his speech at the rally, Garamendi lauded what he claims is a great support for education by his party with a message he directed at students in attendance.

“I suspect we have some folks from Sac State and the community colleges here,” Garamendi said. “There has been no president except these last two Democratic presidents that have cared more about education – this man, Bill Clinton, and Barack Obama,” Garamendi said.

Assemblyman Ken Cooley, D-Rancho Cordova, was also in attendance at the rally. His son attended American River College and he also told the Current that he had proposals to help community college students.

“As a state, I think we need to significantly increase our investment in S.T.E.M. (science, technology, engineering, and mathematics) education if we want to compete in the world economy,” said Cooley.

“My youngest son went to (ARC),” Cooley added. “Bryce is on the ministry staff at the Church of the Foothills. It’s the burden of debt that is a problem for so many kids. It’s bad for them but it’s also bad for the economy. Goods and services – that sort of spending helps our economy. Now we have kids graduating without a job and with debt.”

Cooley mentioned that students not getting the classes they need for graduation in time is a problem at community colleges, and said that the investment is more than just of money.

“Education is not just costly with money but also with time,” he said. “Supporting access to higher education and efficient access is important.”

The fact that many college students were in attendance at the rally led Kerri Asbury, chairwoman of the Democratic Party of Sacramento County, to reflect upon the importance of student activism in politics.

“I think that engaging our millennials is critical for winning elections,” Asbury said. “I’m glad to be back at UC Davis, where I first got involved.”

Rhonda Grey, who is taking classes at Sacramento City College, was in attendance at the rally and has volunteered for congressman Bera.

“I volunteer for Bera campaign on Sunday afternoons making phone calls,” Grey said. “Starting this Friday, Oct. 31, I will be volunteering each day until election day for three to four hours canvassing neighborhoods.”

“I truly enjoyed President Clinton’s speech,” Grey said. “However, I thought Bera’s speech was much more heartfelt and thought his passion for education, S.T.E.M. and his roots truly motivated his constituents.”

She is motivated to participate in the political process because “the right to vote is a privilege and an honor to voice our own personal opinion. Our forefathers fought and died for every citizen to be able to vote.”

President Clinton’s speech had a positive outlook on America’s future. He credited the youth and the educational system.