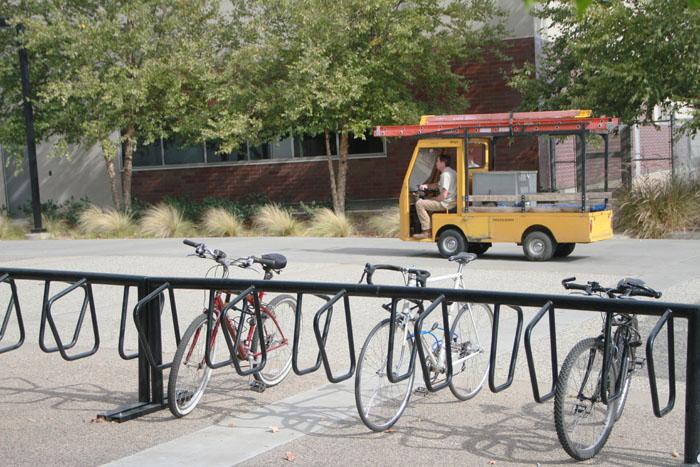 Bryan Ayule was sitting in his calculus class when his teacher noticed a student staring out the window.

“The teacher asked what was wrong and (the student) said ‘some guy just walked up there with bolt cutters and stole a bicycle,’” said Ayule.

There has been a rash of thefts on campus this semester, with 48 cases of petty theft and six cases of grand theft reported to the Los Rios Police Department between Aug. 23 and Oct. 27.

Los Rios Police Department Sergeant Mike Olson said that many of these thefts are of bicycles.

“There are a lot of students who ride bicycles,” said Olson. “We do recognize there are issues with that.”

The LRPD is promoting their Operation I.D. program to help students find bikes that have been stolen. Students give information to the police about their bicycle before a thief strikes.

“We encourage (students) to give us photos, engrave their bikes, et cetera. We then put their bike information into our system and then if their bike is ever stolen we have access to that information immediately,” said Olson.

“The majority of stolen bicycles have been left unlocked, locked only to themselves, or secured with a lock that is too weak,” the flyer says. It also advises bicyclists to “use a U-shaped high security lock” and “secure quick-release wheels and seats with a cable, chain, or other security device – but be aware cables are easily cut.”

Earlier this month, Green was walking back to his bicycle parked near the student center after taking a nap on campus when he noticed something peculiar.

“As I was walking back to where my bike was, I saw it leaning up unlocked against the wall of the student center,” said Green. “I had a cable lock. That lasted me from high school up until then. I went to where I locked up my bike and my lock wasn’t there so I assume someone cut it.”

Green said he had never heard of Operation I.D. but that he supports the concept.

“This is the first I’ve heard of it,” said Green. “To my knowledge, most bikes have a serial number on them. If your bike gets stolen they can tie that to your student I.D.”

A representative from the Sacramento Area Bicycle Advocates, an advocacy group for bicyclists, will be visiting campus on Wednesday, Oct. 29 at 9 a.m.

LRPD Captain John McPeek said that the SABA will be visiting all the Los Rios campuses.

“What they do basically is they teach people how to properly secure their bikes and how to prevent thefts,” said McPeek.

“They give a demonstration of different types of locks, down from the expensive locks to the cheapest ones, and they show people how easy it is to cut them off or how hard they are, depending on what you want to purchase and what kind of bike you have. They’re not only here, but district wide,” McPeek added.

Bicycles aren’t the only items that have been stolen as part of the petty theft spree. He said another major category is “unattended theft.”

“We take theft reports even of ‘Well I was sitting there at the computer lab and my book bag was next to me and I got up and walked to the printer and back and my stuff was gone,’” Olson said. “It’s that fast.”

McPeek said that he hopes the police educate those on the ARC campus to take all necessary precautionary measures to protect their property.

“The goal here is education,” McPeek said. “Giving people the tools to take ownership, really protect their own property, and empower them to make good decisions.”

Election winners react to their campaign posters being defaced