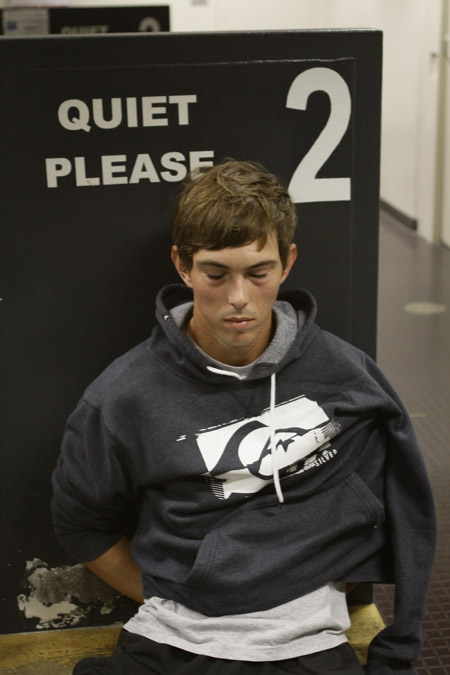 UPDATE, Nov. 28, 2016: Nick Cardoza and D.J. Adams were never convicted of any crime in this case. The charges were dropped against Cardoza pursuant to Penal Code PC 1000, a deferred entry of judgment drug diversion program.

Two American River College students were arrested Monday, Oct. 20 by the Los Rios Police Department for possession of narcotics with the intent to distribute at the intersection of Orange Grove Avenue and College Oak Avenue.

Corporal Noah Winchester arrested Nick Cardoza for possession with the intent to distribute six pills of oxycodone and eight pills of percocet, both of which have been defined by the federal government’s Drug Enforcement Agency as a Schedule II narcotic.

Winchester also arrested D.J. Adams for constructive possession, which means that he was able to access and control those substances even though they were not on his person.

Los Rios Police Department Sergeant Mike Olson said that there was evidence that Cardoza had the intent to distribute oxycodone, but would not reveal what that evidence was.

“I couldn’t tell you, it would be inappropriate to tell you here what the evidence was because it’s an open case,” said Olson.

“In general, you’re looking for evidence that they plan to sell it,” Olson added. “For instance, with marijuana. When someone has a backpack full of marijuana and they say it’s for personal use yet it’s all individually bagged, they have extra bags in there, they’ve got scales, they’ve got a wad full of singles in their pocket – all those things tend to indicate that this really isn’t personal use.”

Cardoza and Adams were arrested while in the company of a third man, Kyle Wofford, who was in possession of marijuana. Wofford had a medical marijuana identification card issued by the state.

Kyle Wofford spoke to the Current, saying that “what I saw on the (Sac. sheriff) website is not what was going on.”

Wofford says that Cardoza and Adams had no intention to distribute narcotics.

“Basically what happened is we were hanging out at that little area there by the bus stop where the pictures were taken. Police officers came upon us very suddenly already anticipating that we were doing something, I guess because the area is a ‘hangout’ for people…They found medical marijuana on me – which I alluded to – and which I have a prescription for as well,” Wofford added.

Nick Cardoza did not return numerous requests for comment as of press time.

D.J. Adams did not return numerous requests for comment as of press time.