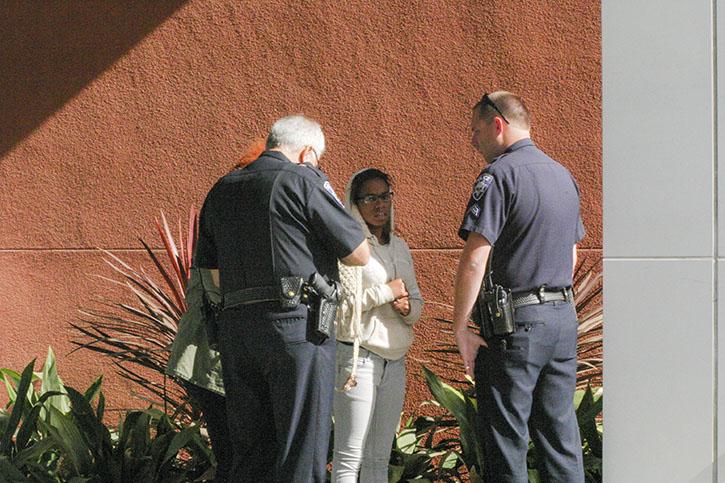 A physical altercation involving four women began in the American River College cafeteria and escalated into the area in front of the bookstore on Monday around 12:30 p.m.

One of the women involved in the fight, ARC student I’yannah Pollard, 18, recounted the events leading up to the fight.

“We were in there at the table minding our business, and these girls been looking at us, mean mugging us for a while. We just now said something today,” said Pollard. “So I asked if they had a problem, all calm, like ‘Do you got a problem?’ and then she got smart, and the next thing you know, I was like ‘Do you want it to be a problem?’”

“They started off first, her and some other girl, and the girl that was with the other girl jumped in, so me, as her friend, I’m not looking to let my friend get jumped, you know? So I handled the other one,” Pollard said. “We was going at it, you know, and the next thing you know we came out here. I don’t know how we got out here. Me and the other girl was going at it, and I wanted some more. I wasn’t done. So the girl that she was fighting with had jumped in with me. So basically it was a one-on-one jump.”

Cpt. John McPeek of the Los Rios Police Department confirmed that the incident began in the cafeteria and moved to the front of the bookstore.

Latrelle Swayne, an ARC student with a connection to one of the women involved in the fight, was one of many bystanders that attempted to intervene.

“Well, I guess these two girls were talking s—, and they were both with one friend each, and s— escalated. Four females talking s— to each other. One of them happened to be my friend’s girlfriend. We went to go and break it up — they were fighting inside the cafeteria. Then after we broke it up, they went outside the cafeteria, continued the fight, and we broke it up again. That was that,” said Swayne.

Bystanders expressed concern at a lack of police presence.

Theater major Kyle Joyce was present in the cafeteria when the altercation began.

“They were calling each other names — horrible things. They mooned one of the other girls. One of the girls was walking around with a skirt and no underwear on, so she just pulled it up and said ‘Kiss my a–,’” Joyce said. “I would describe one of the girls as ratchet. She lifted her skirt, had visibly no underwear on, and said ‘Kiss my a–,’ and all I could think was that was the most ratchet comeback I’d ever seen.”

Joyce attempted to contact campus police when the fight escalated.

“I called the number that they have posted throughout the cafeteria, and it’s an automated message saying ‘If this is a non-emergency, press zero,’ and then it’s going through all this other stuff, and I just couldn’t get a hold of somebody to take my call for the life of me,” Joyce said. “They need a better automated system.”

In addition to problems with the automated system, Joyce noted a long response time.

The Los Rios Police Department currently has seven vacant positions out of 34. McPeek feels that filling these vacancies, and thus increasing the number of officers on campus, could aid the department’s ability to respond to such incidents.

“I think if we had more officers out in the field, they could respond quicker. They’d be more visible, because we really strongly urge and support community oriented policing. We want officers to walk around, not just drive around. Having more visibility out there obviously helps deter a lot of the problems,” said McPeek.

Police restricted the access of all four women to the ARC campus. No administrative disciplinary action was immediately taken, according to public information officer Scott Crow.

One of the women involved in the fight, Kar’lon Young, challenged the women she fought with while still in front of police.

“We can fight again,” Young said. 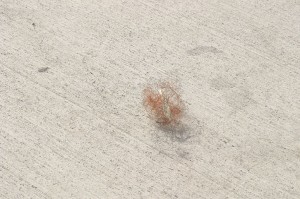 The ripped-out hair of I’yannah Pollard, one of the women involved in the fight, was still on the ground in front of the bookstore after the incident.

Something for nothing: The rise of crowdfunding