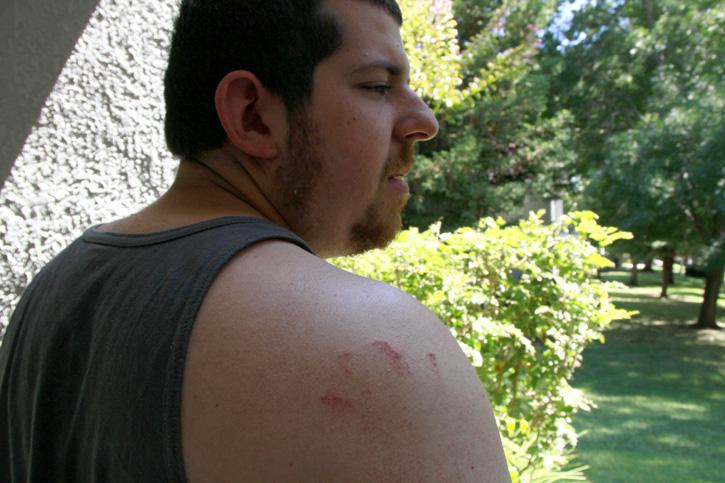 A woman accused of going on a “punching rampage” was arrested Tuesday following an alleged assault spree that began in a classroom and escalated into the hallways, and involved the battery of more than seven students and faculty.

According to Sergeant Mike Olson, Hall is also a suspect in an earlier call to campus police placed from the library at 10:30 a.m. Tuesday morning.

The incident is alleged to have started in the Fine Arts building, room 512, during an instrumental voice class taught by professor Catherine Fagiolo. Josh Perkins, a film major who was present in the class, claims that Hall accused her classmates of laughing at her prior to the attacks.

“Me and my girlfriend were talking a little during the class,” Perkins explained. “The woman who was sitting in front of us, who later went on a punching hurricane, decided to turn around and say, ‘You guys need to shut up, or I’ll punch you.’”

Perkins, who described the alleged attack on his Facebook page as a “punching rampage,” claims that Hall continued to display aggressive behavior.

“There’s honestly just something wrong with her, because she kept mumbling about it long after the event had transpired,” said Perkins. “She was mumbling a lot. It was like, ‘Don’t laugh at me.’”

Perkins’ girlfriend Loren Otis was also in the class.

“It looked like she was about to start crying and left the room,” Otis said. “I thought it was a little weird, so I paid attention to that, and when she came back in, she did a little circle like she was about to just leave, and then she just decided not to, and pushed two guys in front of her. She then said something like, ‘Are you guys done laughing at me yet?’ and she was yelling at this point.”

According to Perkins and Otis, Hall then turned her attention on Perkins.

“She looked over at Josh, and made a beeline,” Otis said.

Perkins claims that Hall then pushed him from behind, scratching his shoulder and drawing blood in the process.

“(Professor) Fagiolo then walked over, and was like ‘You need to leave, so just leave, go.’ So she went out for a little longer,” Otis said. “It was a little longer than the first time she left, she then came back in. There’s a pretty big wooden table in the room, and she flipped the thing, and then flipped the podium.”

“She kept saying, ‘Are you guys laughing at me?’ I kept asking if she was OK–I wasn’t the only one to ask–it was like a mental breakdown. Fagiolo again asked her to leave, and that’s when Josh called the police,” said Otis. 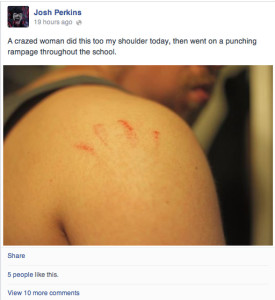 Perkins posted a photo of his injuries on his Facebook page, describing the incident as a “punching rampage.”

“Apparently, she attacked two people in the first hallway, three people in the other hallway, two people in the main hallway into the fine arts building, and then on her way out of the parking lot, someone got hit. There was a guy who was like, ‘Yeah, I was just sitting here on my phone, and I got bopped twice, and I don’t even know what happened,’” Otis continued.

ARC student Rebecca Jines claims that while she was outside the theater building on the phone with her mother, Hall approached her.

“A woman I didn’t know approached me and very timidly said, ‘Excuse me,’” Jines explained. “I moved the phone away from my face and said, ‘Yes?’ and she came closer and said, ‘Were you talking about me?’”

“I said, ‘No, I was talking to my mom,’” Jines continued. “She came to stand directly in front of me and yelled, ‘I know you were,’ then hit me–first in the right side of my face, and then the left, open handed, and walked away back into the theater building.”

“I called after her that I was calling the police, and she yelled back that she didn’t care,” Jines said. “I called the campus police and they told me to meet an officer in the front lobby. When I went back in, I found out I wasn’t the only person assaulted.”

Jines was left confused by the attack.

“She seemed fine when she approached me, but what happened after didn’t make logical sense. She seemed to be hearing things that weren’t there.”

“I don’t think there was particularly a motive,” said Perkins. “Other than the fact that she clearly thought everyone was making fun of her. Delusional–and in her mind, she was probably thinking ‘These people are laughing at me and I’m going to show them what for.’”

“Me and (Loren) were in the seat behind her, joking around and laughing, but none of it was directed at her,” Perkins continued.

“It was really surreal,” Otis added.

“(Professor Fagiolo) was like, ‘This is what happens when you bring all your stress into this room and then sit in front of a bunch of people.’”

Otis believes there is a larger issue at play.

“I think that mental health can definitely be handled better,” Otis said. “That’s kind of a problem I’ve noticed, that no one really knows how to react to that. They don’t seem to have any kind of support, and no one’s educated about it.”