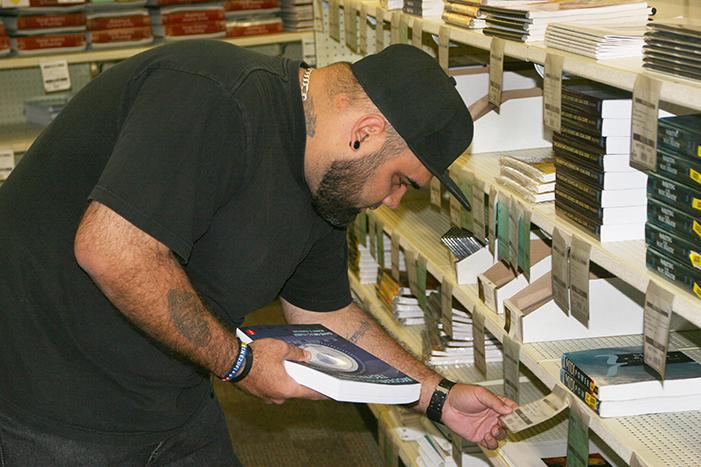 Jimmy Espinosa, aka “Pro Mañon,” American River College student, commercial music recording major, on Jan. 31, 2014, checking out the books for his class. Espinosa considered either purchasing or renting textbooks for his classes. (Photo by Alex Panasenko)

Student Senate President Kenneth Hinton says that in these few months they have “a lot of work to get done.”

One of the larger upcoming events this semester will be March in March. This event will take place on Monday, March 3. Students from all California Community Colleges will come together at Raley Field and march to the State Capitol.

From there, Hinton says students can either “listen to speeches by different colleges and the Student Senate for California Community Colleges” or can go inside the building and talk to congress.

“It’s one of the best feelings to march in there lobby congress on behalf of the students,” says Hinton

Another advocacy event will be Lobby day that will take place on February 6 in the capitol this event is where student leaders from community colleges are able to talk to legislators and lobby them on issues that affect students.

One of the main things that Student Senate plans to advocate for at the event this year is affordability and accessibility to textbooks.

After not attending the Fall General Assembly due to a lack of time to prepare for it, Student Senate plans on attending the LA conference on May 1-4.

This General Assembly is open for all students and applications will be due March 13.

According to the tentative schedule, voting for the Spring elections will be on April 8-9 and students interested in being part of ASB can get the application packets from the Center for Leadership and Development starting March 2.

The voting will most likely be all online using the program Votenet though e-services, as it was with the special elections that took place Nov. 12 and 13.

This all online format was used for the first time during those elections, the administration and the board had high hopes that this would increase the number of voters. However, even with this more accessible mode of voting, only about a third of students voted in comparison to last spring’s election where voting was on campus.

Kenneth hopes that next year’s board will have a discussion about Vote-Net and challenge that mandate from the district and negotiate costs.

Increasing voter turnout and student involvement is something Student Senate Senator and Public Relations officer Daniela Vargas would like to accomplish by the end of the semester.

“I would like to find a way to get more students involved in the happenings of the school and have them be an even more active part in the decision making that occurs in ASB,” said Vargas.

Another branch of the ASB, the Joint Budget Committee, held a few meetings during the winter break and has completed bylaws that are awaiting approval from the administration.

JBC has completely changed the way the way accounts are set up in order to simplify it and will be working on completing the budget for next year.

The CAEB will be planning and preparing for the three club days that will take place this semester.