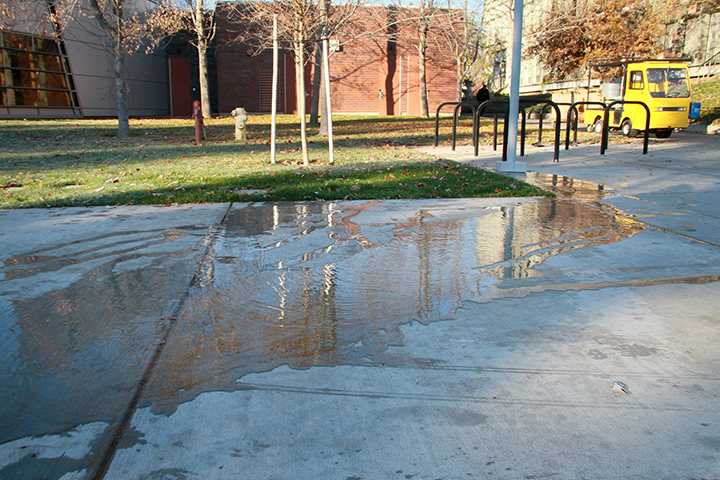 A broken pressurized sprinkler spills water on the pavement behind the Liberal Arts building this morning when temperatures were below freezing, creating a potential ice slick on campus.

A series of water system malfunctions on campus created potential ice slicks and shut off heat to several classrooms and offices in the Physical Education and Health & Education buildings today.

Watt said the whole Health & Education complex had been affected.

“Our heating system is what’s called a hydronics system. A hydronics system uses two lines, a coolant line and a heating line. It goes underground and it heats all of the buildings,” said Preston Harris, custodial supervisor at ARC.

The water main break near the American River campus gymnasiums negatively affected the HVAC system that feeds into several buildings on the south end of campus.

“Anytime the temperature drops below freezing and you have lines that are either uncovered (or) … plastic PVC, they’re going to pop,” he said.

Michelle Deurloo and Tiffany Hayter, both students in the respiratory care program, sat bundled up in the sun on one of the benches in the Health & Education building.

“We don’t have any heat,” said Deurloo. “How you see us now is how you see us in the classroom, with our gloves and coffee.”

The cold can affect some people negatively, triggering bronchospasms or in people with asthma, said Deurloo, but most students had more mild symptoms today.

“There has been some sneezing and blowing of the nose,” said Hayter.

As of this writing there have been no reports to police of injuries because of the spilled water or cold classrooms and offices.

Harris said that some of the pipes on campus are PVC, particularly parts of the sprinkler systems like the ones that broke near the quad between the front of the bookstore and the east side of the Liberal Arts building caused water to spread over sidewalk, creating a potential safety hazard in below-freezing temperatures earlier this morning. The area has since been taped off.

Dawn Benjamin from Los Rios Facilities confirmed the problems and said that the school was working to take care of the issue.

Similar malfunctions with the water lines near the Student Services building were creating separate issues with water availability and contractors are currently working to remedy the situation, but it is difficult work.

“They had to jackhammer cement and dig several feet to get to the line,” said Harris.

Laduan Smedley, director of administrative services, was not available for immediate comment.

Be the first to comment on "Dropping temps, bursting pipes and freezing students"