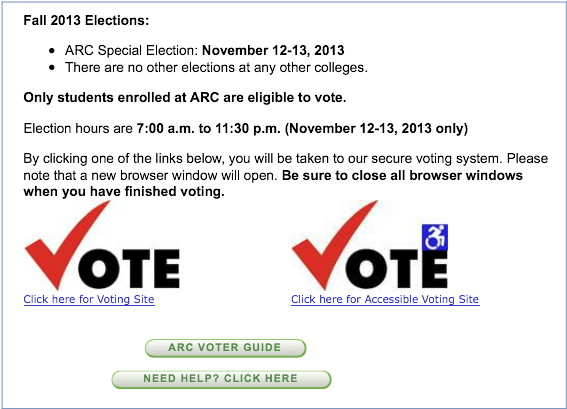 eServices provided an online method for students to vote Nov. 12 and 13

The Associated Student Body Special Election results are in and American River College has a new student senate Vice President, Tamara Trecek-Dunning the only position that was opposed.

Our new ASB president is Kenneth Hinton, who was the only presidential candidate on the ballot after Jorge Riley was not allowed to run in this special election.

This was the first time that elections were completely online via eservices and had 310 voters; around a third of the turn out from last spring’s election.

All student senators ran unopposed and were elected as senators on the board.

Voters where given the option to vote yes or no for the candidate.

Trecek-Dunning spoke on being the only winner to run against someone saying, “it’s a little nerve wrecking.”

“Laurie Jones has been a fantastic senator and she remains senator and I’m really excited about being able to work with her,” she added.

“The ASB senate really needs to work on regaining the trust of the students,” said Dunning.

“I’m feeling pretty overwhelmed because there is so many things that we have to get done, that we need to get fixed,” said newly elected student senate President Hinton

Bathroom graffiti on the rise

Be the first to comment on "American River College election results"