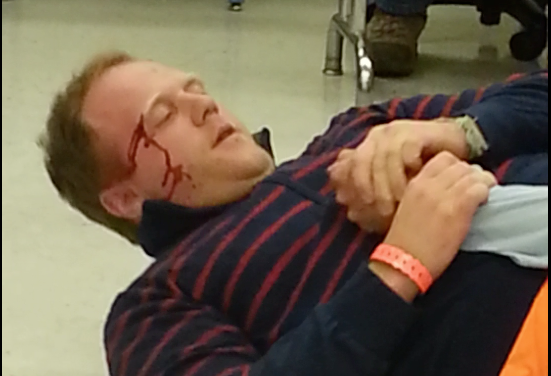 A screen-grab of a video leaked to The Current showing the incident.

A video showing an American River College student bleeding from his head after two students wrestled during a class in Davies Hall went online this week. The altercation took place in Professor Geoffrey Stockdale’s interpersonal communication class Monday as students sat in a circle of desks and watched. Stockdale can be seen in the video sitting in the center of the room near the back wearing a green shirt.

The 56 second clip shows two students with their shoes off demonstrating a take-down technique on the classroom floor. During the takedown, one of the students hit his head on the tile, causing it to bleed, as Stockdale remained seated and continued to watch them. “(One student) wanted to do a particular takedown,” Stockdale said to The Current. “And so there was (one student) with his back on the floor and his legs up around (the other’s) waist, and somehow he did this takedown, and with no mat… of course this is the part that’s going to get me fired. Irresponsibility and allowing it to happen.”

Students outside the communication class Wednesday, who did not want to provide their names, had mixed feelings ranging from dismissal to concern about the situation. Some students said they “did not want to get (Stockdale) in trouble” but thought it was inappropriate. “If you were to ask ‘why did you let this happen?’ I would say I wasn’t sure anything was happening till it happened,” Stockdale said. “I didn’t see this as a particularly risky choice.”

Stockdale did not call for medical attention for the student who was bleeding and said he was not concerned about what happened. He has not talked to the students involved since the Monday class where the altercation took place.

Alan Morte, a communications major present during the class, felt there was value to the display during this class session, where the discussion topic was trust. “It was interesting. It pressed some boundaries, but for the most part it brought an experience that pushed people’s perspectives and it was supposed to do that. We were off guard and we weren’t expecting it, but at the same time when I went home Monday night and really sat down and thought about it, there were so many rich elements that we pulled out of it,” Morte said. The Current will have more information as it becomes available.

ASB votes for recall of Student Trustee after complaints